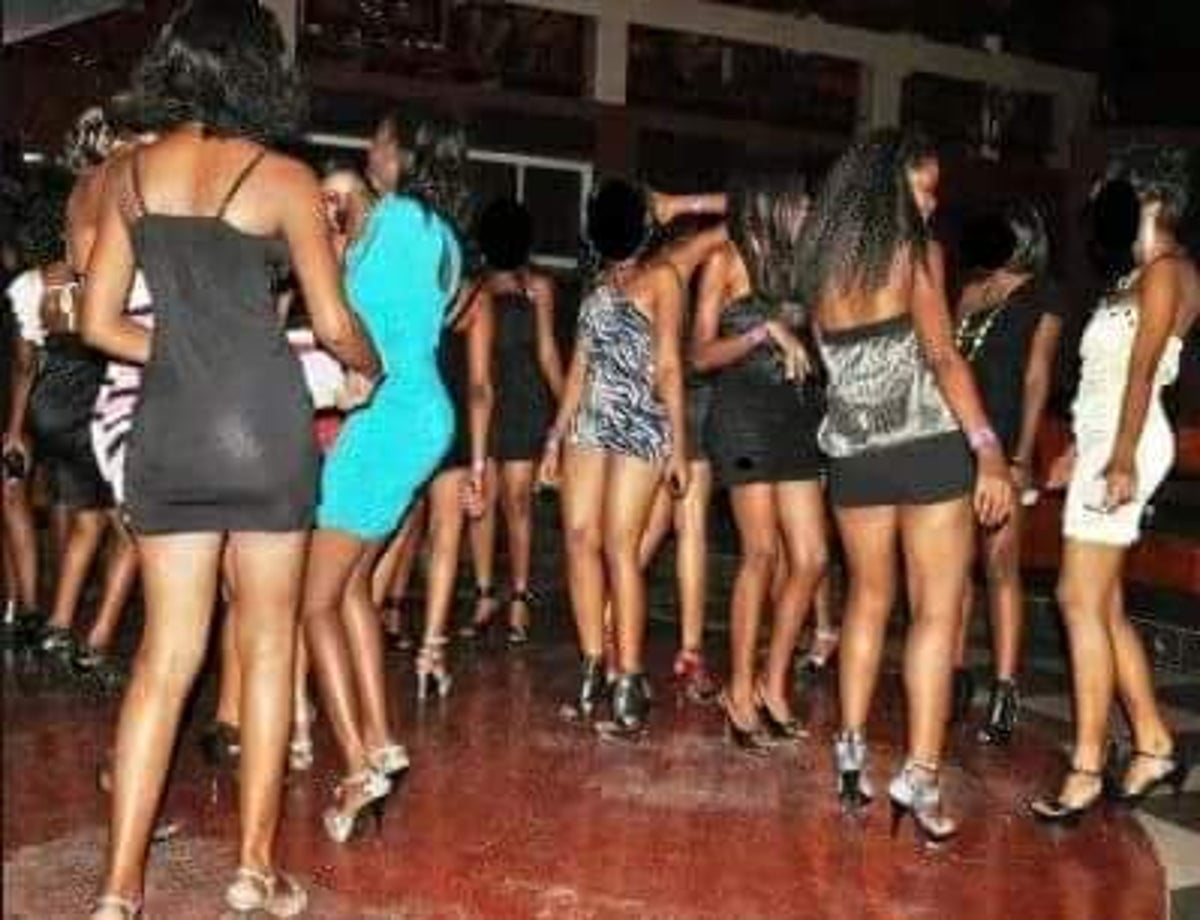 It’s a bad time for brothels in Port Harcourt, Rivers State now. Hoteliers and s*x workers are lamenting low patronage forced by the dreadful serial killings of prostitutes in the city in the last six months.

Already the police have arrested a 39-year-old ex-militant Gracious David West, alleged to be responsible for the murder of  seven women in Lagos, Imo and Rivers states. The motive for the killings by the suspect, whose last victim was found dead in a hotel room in Rukpokwu area of Port Harcourt last Wednesday is still being investigated.

Some sex workers who spoke with The Nigerian Xpress vowed to rather go hungry than go out with a client who will end up strangling them to death in a hotel room.

Jenifer Bethel, a sex worker in one of the bordellos on Azikiwe Street in the Diobu area lamented that they had been facing challenge of insecurity by criminals in the area. She said they would endure and not be tempted by money to risk their lives.

“The killing has made us to be smart and careful in doing our business. None of us wants to go out with any client now even if the man promised to give us N10,000.00 nobody will agree to go out. So, even inside house here we are afraid how much more going out with a man. You go for overnight or for short time, the next thing you will hear is that the person has been killed.

READ ALSO: Osinbajo and politics of vendetta and long-standing hate, by Steve Nwosu

“Before now our girls were being robbed by bad boys in town who will attack us and made away with our belongings. Many of our customers are not coming again because of the bad boys. Now we cannot go out because of the serial killers. Our business is gradually dying.”

Another sex worker who pleaded for anonymity said, “the serial killing has affected our business. As it stands, I cannot leave this hotel with a client to another hotel or living house, if the client cannot sleep with me in my room, let him go.”

On his part, Mr Simple Oguali, manager of one of the popular hotels in Port Harcourt, lamented that even the men that patronise the women no longer come to the hotel. He said the development has also drastically affected their business, as men who may want to relax and have fun in the hotels are now afraid of embarrassment and arrest by police who may be after the serial killer.

Oguali told The Nigerian Xpress that, “The current development is really bad but in our own axis here in Port Harcourt, such report has not been recorded. Killings have not been recorded in this area. Really, most of our girls are afraid of going out because of the killings and presently we don’t have the number of customers we do have.

“Normally, we hold meetings with the girls and other members of the management once a week. We advise them that if they suspect any of their guests, they should invite the management and we will take action.

“For us, the hotel owners, we are being very careful of people coming into our hotels now. We try to make sure we monitor whosoever is coming into the hotel. We know the type of property you are coming in with, the kind of person you come in with even if you are drinking at the reception we monitor you on that table.”

Aside the hoteliers and sex workers, residents in the city are also afraid that if the menace is not curbed, it may spread round with killings of not only women, but also men.

Stanley Onyebuenyi, a trader at the Rumuwoji Market in Port Harcourt, described the killings as painful. He regretted that the crime is happening in the state because of security lapses, stressing that the country has lost so much blood and would not want to continue losing its citizens to some miscreants who think they have the right at any time take lives.

“The killing is a very painful event. I have been in this state for over 25 years and have not seen such a thing happened. I don’t know why the serial killings by now. It’s saddening because if people can go and look for their daily bread, I know once they mention hotel, people will think every victim is a sex worker but it is not true. Some go to the hotel for businesses but going to meet untimely death is very painful.

“I call on security operatives to do their job because I know if police mean to arrest the perpetrators of the evil act, they will achieve that. They have intelligent men that know how to follow event. They should make sure they end this evil because everybody is in fear, we don’t know who will be the next victim. They are killing girls now, we don’t know if after killing the girls they will start killing men.

“So, if we do not check it and stop the menace, the country is already losing human beings and is not good. The police should do their job without fear or favour. Anybody arrested should be made to face the wrath of the law irrespective of his connections in the society.”

No fewer than 10 young women have been killed through strangulation by suspected serial killer moving from one hotel to another in Port Harcourt in the last six months.

The State Commissioner of Police, Mustapha Dandaura who confirmed the killings of eight girls in different hotel rooms in Port Harcourt, had told journalists and subsequently while addressing aggrieved hundreds of women that protested to the Police Headquarters in Port Harcourt over the killings, that four persons arrested in connection with the crime were assisting police investigation to apprehend other suspects.

Dandaura revealed that one of the suspects was arrested by the Kaduna Police Command, the other arrested while trying to allegedly lure a victim with a cash promise of N30,000.00. Another was arrested in a hotel room in the act of strangulating a victim and the last captured in a CCTV footage entering a hotel with a young lady later found dead.

He also assured that the police command had strategies to nab the killers and bring back sanity to the state.

He said “We appreciate what you are doing to express your own anger and dissatisfaction. If you are following the trend of the Command, I had a press conference with all the media houses and I have told them the action we are taking in respect to these serial killings in the past two months.

“I told them the measures we have taken and the arrest so far as of yesterday (last Tuesday) and I am happy to announce to you now that this morning (Wednesday) as early as 2am in one of the hotels called Nsirim Motel in Rumuodumanya, there was a distress call to the Divisional Police Officer of the area that a lady was heard shouting inside one of the hotel rooms and the DPO quickly mobilised, went to the hotel and we discovered that a lady and a man were inside that room.

“When we knock the door, we had to force the suspect to open the door and we saw a lady with a middle-aged aged man, we then asked them what happened, the lady said that he took her and booked that hotel room and in the night while she was asleep, the man took the towel wanted to strangulate her. So as she woke up they started struggling and she said it was her shouting that drew the attention of the people outside. This brought the total number of suspects arrested to three. This morning, I just finished interviewing the latest suspect and investigation continues.

“So we want to assure each and every one of you that the Command will not relent in the efforts to see that this cult group who have been going around killing these innocent women are arrested and brought to book. It’s a cultist activity because we discovered that all the victims that were killed they used to put white cloth around their neck or around their waist, so it’s a sign that it’s a cultist activity going on.

“So, we will continue to pursue them and make sure we get rid of the menace. I as Commissioner of Police, want to assure you efforts are on ground. We have had meeting with all the hoteliers and given them guidelines on how to operate hotel and guest house, that there is no way someone will go to a hotel, book a room and you do not have his identity. We have given them all the conditions they must follow.

“We want to assure you that we are not sleep yet we are trying our best to ensure that these cult activities that are happening must be brought to an end. It is a menace, they have a target but we are going to assure them that we will arrest all of them.”

Meanwhile, the Rivers State Government has assured that the Governor Nyesom Wike-led government would leave no stone unturned until all those involved in the demonic act are arrested.

This as the state government has also called for the intervention of the Federal Government to end the menace in the state.

Secretary to the State Government, Dr Tammy Danagogo made the appeal while addressing hundreds of women who protested to the Government House seeking an end to the serial killings of ladies in the state.