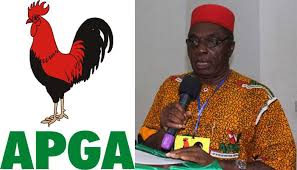 Anambra State Chairman of the All Progressives Grand Alliance (APGA), Chief Norbert Obi, says that the principle of zoning in political contest will strengthens democracy.

Obi told the News Agency of Nigeria, (NAN) on Saturday in Awka that zoning of political offices by political parties would create level play ground and allow for healthy participation for all stakeholders.

“Zoning, if practised by the political parties gives room for principles of justice, equity and fairness.

“For us in APGA, it was founded in 2002 to champion the principles of justice, equity and fairness and we stand by that principles,”he said

He said that APGA as a political party was unbending in its belief in true federalism in the country, which was show cased in 2017 when it hosted the maiden summit on restructuring of Nigeria–Nation.

Obi said that APGA and its board of trustee on the leadership of the Anambra governor, Chief Willie Obiano, supported the Igbo Apex Social Cultural Group, Ohaneze Ndigbo, to host the summit in Awka.

Obi said that zoning and rotation of the governorship seat in the state was one of its principles developed by the party to entrenched political process without blood shed.

“We treasure the lives and property of our people as we continue to grow and mature politically, healthy ideology would be embraced for the growth and development of our people,” he said

He disclosed that APGA took its final decision on zoning and rotation under the supervision and approval of the late Dim Chukwuemeka Odumegwu-Ojukwu, during a crucial meeting of Anambra stakeholders at Nteje in Oyi local government area.

“We have three political zones in the state, Anambra Central, Anambra North and Anambra South, two out of the three had served, it is the turn of Anambra South and APGA will keep the faith,”he said

He appealed to the residents to be law abiding and support the administration of Obiano to make him remain focused in the task of delivering enduring dividends of democracy to the people.(NAN)