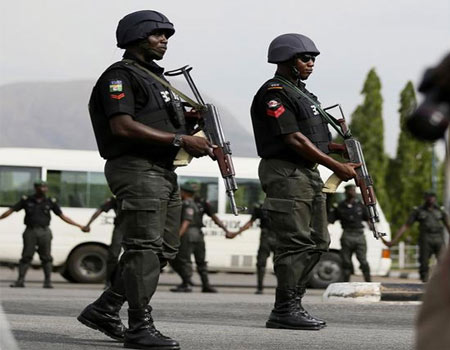 …We will arrest, arraign violators of curfew -Lagos Police
…Remain wherever you are once it is 8:00p.m. -Ogun Police

Joy Anyim
Police operatives in Lagos, are set to enforce the 8p.m. to 6a.m. curfew imposed by the Federal Government, as part of measures to contain the spread of Coronavirus, even as the journey to normalcy begins from Monday, May 4.
The Spokesperson for the Lagos Police Command, Elkana Bala, a Deputy Superintendent of Police, stated this in a statement on Sunday, saying anyone arrested for violating the curfew will be arraigned in court.
According to Bala, the use of face mask, keeping social distance in markets and workplace, carrying the approved number of persons in commercial buses, ban on social and religious gatherings, must be obeyed.
Giving an update of the arrests made during the lockdown, Bala revealed that the command had arrested 2,310 violators, while  2,092 vehicles, 1,535 motorcycles and 369 violators, were impounded during the period.
The statement  reads: “ Following the measures put in place by Lagos State Government and Presidential directives on the cessation of movements in Lagos State (both intra and inter states movements) to curb the spread of Coronavirus, the command massively deployed its resources across the state to enforce the lockdown order. Fourteen identified boundaries with neighbouring states were adequately manned. Tactical units were deployed to reinforce the conventional patrol teams.
“ During the lockdown period, the Command successfully arrested 2,310 violators. Some of the violators were arrested in clubs, some organised parties, or engaged in group exercise. A total of 2,185 suspects were charged to Court while 125 suspects who are mostly minors, were warned and released. The suspects were awarded various degrees of punishments by the Court, ranging from two hours to six months community services and fines between N5,000 and N100,000.
“ Some were asked to write undertakings to be of good conducts/apology letters. A total of 2,092 vehicles were impounded within the same period for violating the lockdown order. Out of the figure, 800 are private vehicles while 1,292 are commercial vehicles. 1,535 motorcycles and 369 tricycles were also impounded.
“ The battle against Coronavirus is not over yet. The command enjoins residents to adhere strictly with the guidelines issued by the Presidential Taskforce on COVID-19 and Lagos State Government to stop the spread of the virus. The use of face mask is compulsory and social distancing principles must be maintained. Businesses and markets must stick to the opening and closing times allocated in the guidelines.
“ Commercial vehicles operators must not carry passengers more than the number stipulated in the guidelines. The order restricting non essential inter States movements is still in force. The ban on social and religious gatherings has not been lifted. Schools remain closed until otherwise directed by the government.

“ The 8p.m. to 6a.m. curfew, imposed on residents by the Government will be strictly enforced. The enforcement teams are fully out to apprehend violators and arraign them in Court. We must all take responsibility for our safety and the safety of our communities. Together we can stop the spread of COVID-19. ”

Bala further stated that the Commissioner of Police, Lagos State, CP Hakeem Odumosu appreciates Lagosians for their supports, while also commending the Officers and Men of the Command for their gallantry, resilience and professionalism in combating the COVID-19 pandemic.

Similarly, the Ogun State Police Command has also appealed to residents of the state to strictly adhere to the 8p.m. to 6a.m. curfew imposed by the Federal Government.
A statement by the Ogun Police Public Relations Officer, Abimbola Oyeyemi, on Sunday, warned that human and vehicular movements within the curfew period will not be tolerated.
While advising residents to remain wherever they may be by 8p.m., police operatives in the state, were also enjoined to perform their duties in line with their rules of engagement.

The statement says: “ In view of the curfew imposed by the Federal Government from 8 p.m. to 6 a.m. daily accross the country starting from Monday May4,  2020,  the Ogun State Police Command wishes to appeal to members of the public to adhere strictly to this movement restriction, as the command in collaboration with other sister security agencies will be all out to enforce the order.“ All human and vehicular movement will not be allowed during this period and anybody found violating the order will be made to feel the full weight of the law. Any vehicle or motorcycle that is found to be violating the curfew will be impounded and the owner will be prosecuted in accordance with the provisions of the law.

“ The command hereby appeal to members of the public to remain wherever they are once it is 8 p.m., and continue their movement by 6a.m. the following day, or risk been arrested or having their vehicles impounded. The command also want to use this medium to appreciate the good people of the state for their endurance and perseverance since the beginning of this trying period and for not giving the security agencies difficulty in the enforcement of the lockdown order.
“  It is expected that the same sense of maturity will be displayed as the curfew begins. The Commissioner of Police, CP Kenneth Ebrimson has directed area commanders, Divisionsl Police Officers  and Tactical aquads, to be firm in enforcing the curfew in accordance with the rules of engagement.”