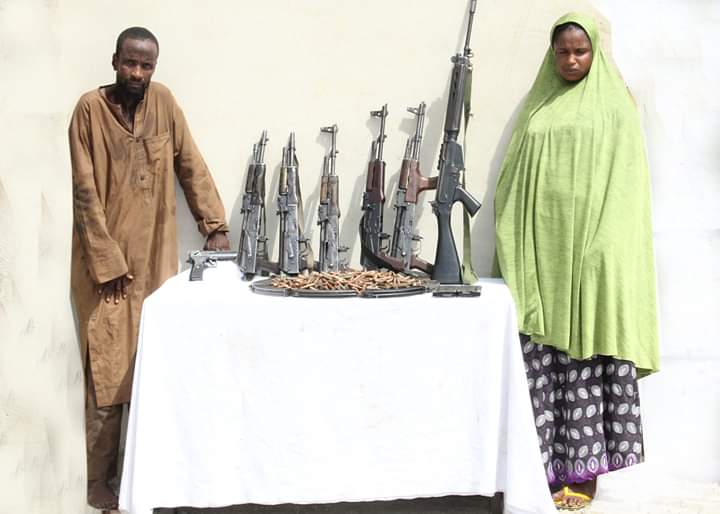 The said armourer, a single mother of two, was reportedly responsible for ensuring the safety of the weapons used by the gang whenever not in use.

Fatima, who confessed of being the gang’s armourer for over a year, claimed that her lover, Usman, introduced her to the ‘job’, as she receives a handsome reward each time the weapons were returned to her after each operation.

Force Public Relations Officer (FPRO), DCP Frank Mba, who spoke on the arrest of the armourer said, “ She acknowledged knowing that the arms which she usually kept in a neatly dug hole in her compound were used for robberies, kidnapping and other criminal purposes.

“Investigations show that Fatima, who is a trader and single mother of two was recruited by her boyfriend Abubakar Usman.

“Since they began operations, the gang is estimated to have made over twelve million naira from their various criminal escapades.

DCP Mba said all the suspects would be charged to court at the conclusion of investigations.

Meanwhile, the Inspector General of Police, Mr. Mohammed Adamu, has assured Nigerians of the continued commitment of the Force to the protection of lives and property and rid the country of crime and criminality especially during this lockdown period.

Delta NUJ praises own members in fight against Coronavirus