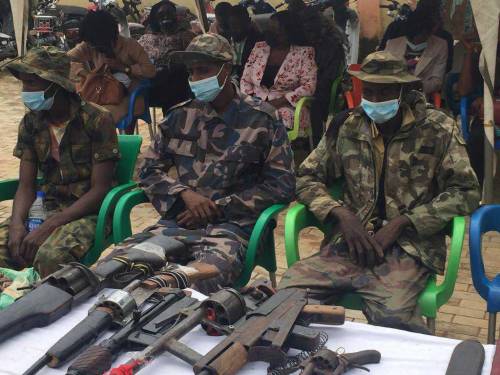 Men of the Kaduna State Police Command has arrested three kingpins involved in the kidnap of over 100 students of Bethel Baptist school, Chikun Local Government Area of Kaduna State.

The suspects, clad in military camouflage, were paraded by the Force Public Relations Officers, Frank Mba, at the headquarters of defunct Special Anti-Robbery Squad (SARS), in Abuja.

According to the suspects – Adamu Bello, Isiaku Lawal and Muazu Abubakar – 25 kidnappers were involved in the operation.

They said they carried out the operation in a desperate bid to get money.

Abubakar, a 27-year-old suspect, said, “Twenty-five of us carried out the operation. We kidnapped 136 students and I got N100,000 share from the money.”

Recall that in the early hours of Monday, 5th July, 2021, bandits stormed the school in Damishi, Kaduna, and abducted over 100 students.

Some students of the school regained their freedom while others ran away and another set were freed on health grounds.

As of August 7, it was learnt that at least 80 students were left with the abductors, while about N60 million had been spent on paying ransom by parents to secure the release of some of the students.

Adesina wants Africa to be independent on healthcare support