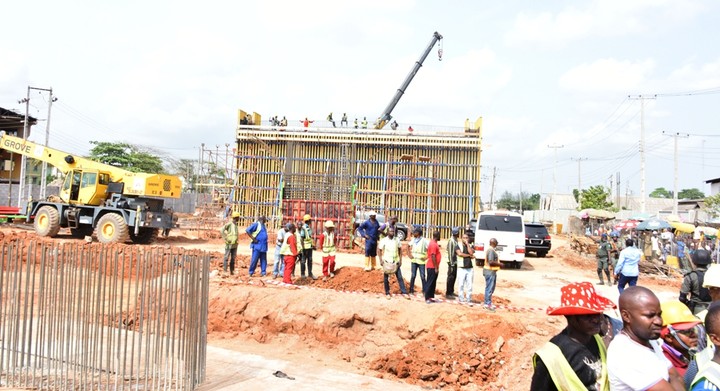 Work on the Pen Cinema Flyover in Agege area of Lagos is now at 60 per cent completion stage, the State Government said on Friday.

The government also said the 10-lane Oshodi-International Airport Road was now at over 50 per cent completion stage, with an assurance that it would be completed by the end of the year.

Speaking during an inspection tour of ongoing projects across the State, Commissioner for Works and Infrastructure, Mr. Adebowale Akinsanya, said it was gratifying to note that after delay caused by rains, work had resumed in full swing across the state.

At Pen Cinema project site, the commissioner, who embarked on the inspection alongside other top government functionaries, said: “This is part of the review of ongoing projects in the state and we are at the site of the critical one, which is the Pen Cinema Flyover along with Airport Road in addition to all other ongoing projects.

“Most of the difficult parts of the work are already ongoing. Overall, we are at about 60 per cent completion stage and right now, we have over 70 major projects ongoing but as can be seen, work is ongoing,” he said.

On the delay, Akinsanya said: “Unfortunately, it is difficult to fight nature and rain has not helped and what we are seeing is the result of the heavy downpour for the last few weeks but the work is ongoing and with the cooperation from the contractors, whatever time we have lost, things will be accelerated.

“We have a good working relationship with Hi-Tech; they are committed to the project and I can assure the people that by first quarter of next year, this project will be commissioned by God’s grace,” the Commissioner said.

Giving details, he said 10 out of the 14 pier walls have already been completed and seven ramps, while the casting of the super structure, which is the high beam was progressing well.

He said government was aware of difficulties being experienced with regards to potholes, saying Governor Akinwunmi Ambode had already directed immediate repairs statewide.

“I like to thank his Excellency, Governor Ambode for giving us the necessary support. The governor is committed to the projects and along with this also is the challenge of potholes being experienced in the State.

“We have been directed by the governor that once we have a brief window of no rain, the Public Works Corporation has already been mobilized to go all out everywhere across the state to get everything done within the next three to four weeks and so you will see our men working all over the roads,” Akinsanya said.

At Airport Road, the commissioner said the project was a bit delayed to ensure that the quality of the work was not comprised and to minimize impact on residents, but assured that it would be completed by the end of the year.

He particularly thanked residents and motorists for their understanding and support, just as he assured that the government remains committed to completing all ongoing projects.

“To me, the critical thing is the traffic management because one of the key things we need to do is to minimize the impact on the citizenry. So, we have been doing a lot and work slows down because of traffic management because we want to accommodate the people living around this area and we don’t want to make things too bad for them but as we make more progress, traffic will get better.

“For the people living in this area and the general public, I want to thank you for your understanding and support but please bear with us. This is a temporary thing and come January next year, you will see a brand new road. At the same time, there might be other things going on but the road will be opened. The work is taking some time because quality is very important. We don’t want anything to affect the quality of the work,” Akinsanya said.

Earlier this year, the state government embarked on repair and rehabilitation of 115 roads carried out by the Public Works Corporation apart from the 48 major roads totaling 129km that were rehabilitated and upgraded by the Ministry of Works and Infrastructure, while another 25 other road projects totaling 94km are ongoing.

NNPC’s trading surplus rises to N17bn in one month