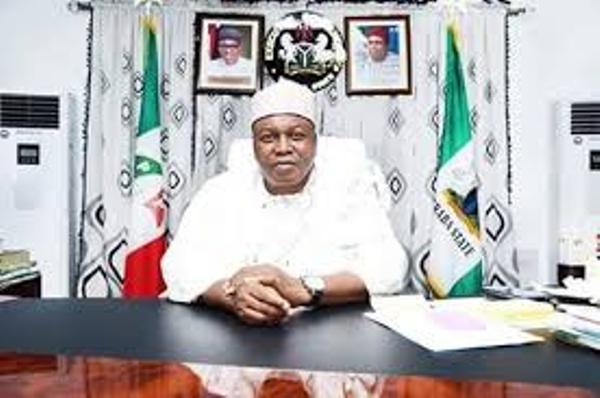 Governor Darius Ishaku of Taraba State was on Tuesday declared the winner of Taraba State governorship polls.
The INEC returning officer of the state, Prof. Shehu Iya of the Federal University of Technology, Yola made the announcement at the state Collation center in Jalingo.
The returning officer said Ishaku of the Peoples Democratic Party (PDP) having scored the highest votes of 520,433 was returned and declared reelected.
He added that Ishaku defeated his close rival Alhaji Sani Abubakar of the All Progressive Congress (APC) who polled 362,735 while Senator Aisha Alhassan of the United Democratic Party (UDP) polled 16,289 to come third.
Iya said that the PDP won in 12 local government councils of the state while APC won in four local government areas.
News Agency of Nigeria (NAN) reports that all the Political parties’ agents that participated in the election accepted and signed the result excluding that of APC.

In his victory remark, Ishaku thanked the people of the state for the overwhelming support which gave him a resounding victory.
Ishaku pledged to sustain his development strides in order to put the state on the path of sustainable growth.
He called on traditional rulers, community and religious leaders to continue to champion the crusade for peaceful co-existence among residents.
Speaking to newsmen shortly after the declaration, Police Commissioner in Taraba State, Mr. Alkasim Sanusi described the exercise as one of the best conducted in the history of this nation.
Sanusi, however, warned against post election violence, adding that anybody caught perpetrating such act would face the wrath of the law.
Also, Alhaji Bello Yero, the Permanent Secretary, Bureau for Local Government and Chieftaincy Affairs, said the victory for the governor was a continuation of the rescue agenda.
“The governor has done so much for the people of the state and deserved a second term.
“Governor Ishaku is a man of peace, a man of integrity, a man of wisdom and a caring leader who is committed to development of the state,” he said. (NAN)