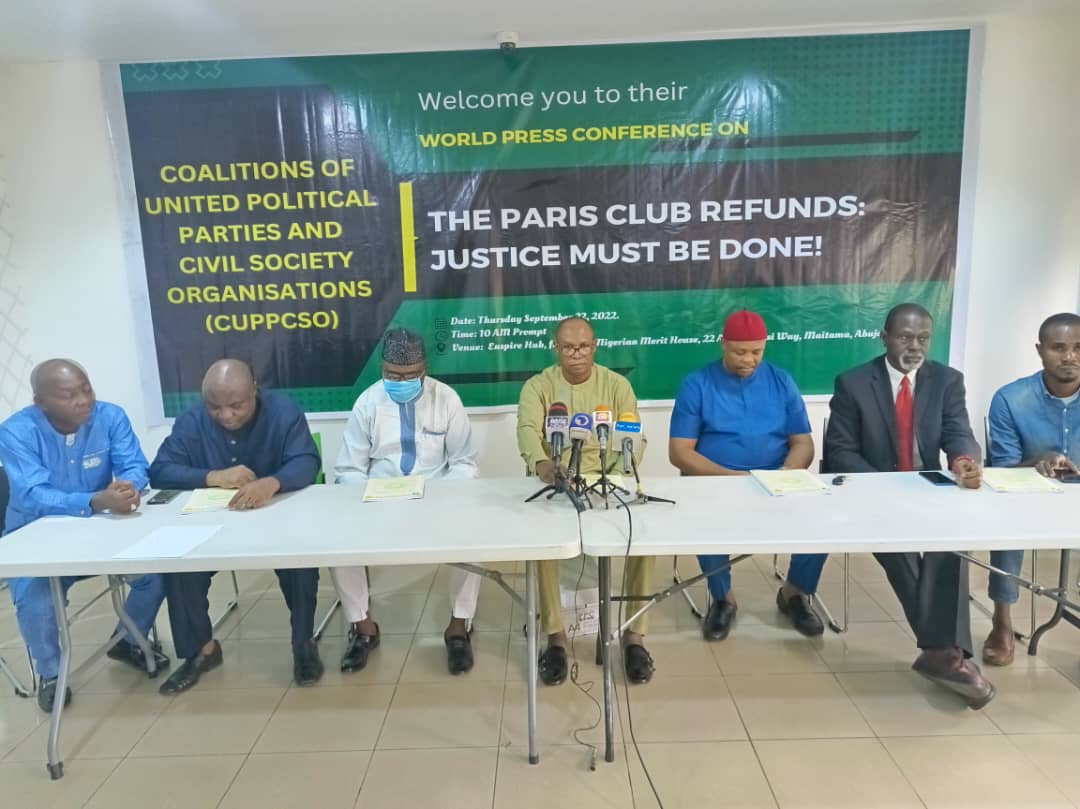 The Coalition of United Political Parties (CUPP) and Civil Society Organisations (CSOs), in Federal Capital Territory (FCT), Abuja, Nigeria at a conference, on Thursday, have called for prompt payment of the outstanding consultancy fees to Linas International and Ned Nwoko Solicitors, by the Nigeria Governors’ Forum (NGF), urging justice to be served.

The bone of contention according to the groups was payment of the Paris/London Club refunds consultancy fees agreed upon with Ned Nwoko prior to the refunds collected by the States and Local Governments.

READ ALSO: http://Tambuwal takes over from Fayemi as NGF chair

The groups saw nothing particularly difficult in the execution of  payment to a man who did such a wonderful job of recovering billions of dollars for someone who made the recovery of refund the beneficiaries were unaware of its existence, appealing to all relevant authorities involved to do the needful and sort this matter out once and for all.

While asserting that Ned Nwoko deserves a National Award and not witch-hunting, the groups said, “It is our sense of patriotic commitment that informs this Press Conference to ensure that justice is done to all concerned on the issue of the Paris and London refund,” expressing the need for the issues relating to the Paris/London Clubs refunds be laid to rest once and for all with all parties involved doing the needful to avert a more complicated dilemma for the country.”

The CUPP averred that its intervention on the matter in conjunction with the CSOs was strictly in national interest to ensure that the facts of the matter are laid bare for broader public understanding and get justice done as quickly as possible.

The statement read in part thus: “We are all aware that recently there was a disturbing incident of claims and counterclaims regarding the Paris/London Club debt exit vis-ā-vis the roles played by consultants and the outstanding charges due to them running into millions of dollars.”

The groups lamented that, the consultancy fee component of the Paris/London Clubs refunds ran into challenges because of the involvement of the Nigerian Governors’ Forum in-between, explaining that, as far as Linas work for Local governments is concerned, part payment was made by the Federal Government on the work done for LGs and balance remains outstanding.”

“Prior to the intervention of Linas International and Ned Nwoko Solicitors, the state governors were not aware that their states were overpaying their loans which were rendering their states broke and unviable, nor were the Local Government Chairmen aware that the deductions being made at source from their allocations were illegal.

“It took the intervention of Linas International and Ned Nwoko Solicitors for the states to be alerted that they had overpaid their loan commitments long ago and for the Local Governments to realise that, having not taken any loans, they were not obligated to be involved in the excruciating deductions that the Federal Government was making on their monthly allocations.

“Hon. Ned Nwoko made them realise that, having not possessed the legal instruments to take foreign loans, they had no business paying foreign loans they had not been part of. It was also the intervention of Linas International that made the FG aware that it was overpaying interests on loans it had already completed paying and there was need to stop and recover the excess payments.

YOU MAY ALSO LIKE: http://PDP steps up efforts to end crisis, as Tambuwal, BoT meet

“It was Hon. Ned Nwoko who assured both the state Governors and Local Government Chairmen that he had the technical know-how, the professional competency and experience to assist them recover their over deductions from the FG.

Concluding, the groups said, “having carried out such an outstanding assignment for the states and LGs to assist them recover billions of dollars that they never imagined they could get, one would have thought that one good turn deserved another and that the NGF and ALGON would, without any hesitation, fulfil their pre-assignment financial obligations to Ned Nwoko Solicitors and Linas International.”