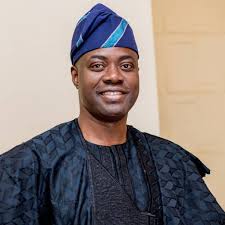 Gov. Seyi Makinde of Oyo State has promised to make the state an investment friendly destination.

Makinde, who made the promise on Monday at a forum for investors in Ibadan, said the state was looking forward to establishing a Lagos-Ibadan economic hub.

He stated that his administration would do everything possible to woo investors that would bring their resources to expand the economy of the state.

” So, you will see that we do not have to lag behind in pursuing what would improve the economy of the state.

”Our state is so blessed in human and material resources, in landmass. Oyo is as big as Belgium.

”We have a state with arable land; meaning that every inch of land can actually be cultivated, ” he stated.

The governor said that the state would use all the resources at its disposal to encourage investors so as to contribute to the expansion of the economy of the state.

He noted that the state was close to Lagos State, making it economically positioned.

Makinde, who noted that there could not be economic development where there was no security, promised to make the state habitable for all investors.

”We want to make this environment conducive, such that you will be comfortable bringing your money and invest in this place and we can assure you that this economy will grow rapidly, ” he said.

The governor also said he would launch a new security architecture to tackle insecurity in the state.(NAN)