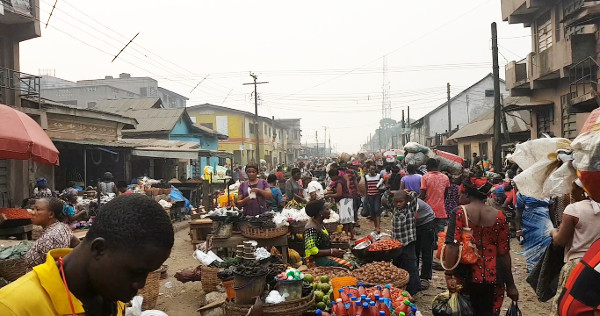 Street traders at the popular Oyingbo market in Lagos on Thursday called on the state government to provide them with affordable shops.

The traders, who spoke in separate interviews with the News Agency of Nigeria (NAN) in Lagos, said they were ready to either rent of lease the shops.

The traders lamented incessant harassment, seizure and destruction of their goods by officials of the Lagos State Task Force.

The traders said it was not their desire to trade or hawk on the streets of Oyingbo market but circumstances beyond their control had warranted it.

Mrs Ganiyat Adelabu, who trades in beverages and spices along the road, told NAN that the Lagos State Taskforce officials had been harassing the traders.

According to Adelabu, most of the traders’ trade and hawk on the road not because they desired to break the law but because the shopping complex built by the government was beyond their reach.

According to her, we have asked the government to construct small affordable kiosks for us which we would pay monthly or annually as the government desires.

“The shopping complex is not within our reach. To rent or lease one of the shops goes for N1.5 million annually and we cannot afford such.

“If government can provide us kiosks within the market to pay N10,000 or N20,000 monthly, we are ready to move there.

“No one desires to deface the market but we earn so little from our trading. We are only able to afford smaller shops,’’ Adelabu said.

Another street trader, Mrs Ngozi Ukah, a stock fish trader, said that most of the traders did not bargain to be on the other side of the law but had to make ends meet.

Ukah said that she was a widow who had bills to pay.

“We have been agitating for the shops to be made affordable for the petty traders who are working to earn a living but all to no avail.

“What we have just experienced is that on Tuesday and today, taskforce officials have been raiding, carting away our goods, our livelihood and leaving us with nothing,’’ she said.

Also speaking to NAN, Mr Ibrahim Adamu, a dried fish retailer, who sells along the road in the market, said that most of their goods that had either been seized or destroyed were purchased with loans taken from banks.

Adamu said that most of the traders had not even started paying back the loans they had just obtained, saying that the task force harassment was a big challenge.

NAN reports that the Lagos State Task Force Unit had in a statement on Tuesday said it would prosecute the 15 culprits arrested in the Oyingbo area of the state for illegal trading activities.

The Head, Public Affairs Unit of the Task Force, Mr Adebayo Taofiq, said that the culprits were arrested during an enforcement operation to dislodge over 1, 500 trespassers at the popular Oyingbo market.

Taofiq said this was in continuation of the clampdown on all illegal street trading activities across the state, saying that it was set to prosecute the 15 illegal traders arrested during the enforcement operation.

He said the illegal traders had persisted, despite several warnings, in displaying and selling wares on major roads, medians, road-setbacks, drainage alignments as well as railway tracks around the entire Oyingbo market area.

Taofiq said the action of the traders impeded the free flow of traffic along the axis, insisting that the Lagos State Government would no longer tolerate illegal activities that violated the state’s environmental laws.

He warned those engaging in illegal street-trading to desist from endangering their lives and operate inside the ‘Oyingbo Ultra-Modern Market’ built by the state government.

Taofiq said that the penalty for engaging in illegal street trading is a fine of N90,000 or six months jail term for anyone found guilty. (NAN)

Divorcee drags ex-husband to court, says she may be pregnant