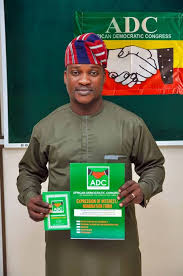 An Ogun State House of Assembly candidate on the platform of the African Democratic Congress (ADC), in the last election, Otunba Bisi Oyedele, has urged the newly-inaugurated Assembly to work hard on motions and bills that would have direct impact on the lives of residents of the State.

Oyedele, who vied to represent the Ipokia/Idiroko state constituency, said this in a statement made available to newsmen, in Abeokuta, the Ogun State capital.

He observed that there were high expectations of the current legislature, adding that it is the responsibility of the lawmakers to live above board in delivering the dividends of democracy to the people.

While bemoaning the neglect and perceived marginalisation of Ogun West senatorial district, the serial businessman appealed to the 9th legislature to “do their part in ensuring an even spread of development across the state.

“I would like to congratulate members of the 9th Legislature in our dear state, but at the same time appeal that they never forget that they were entrusted with the mandate of the good people of this state to play a crucial role in taking our State to greater heights via people-centred legislation.

“It is my wish that our new lawmakers sponsor bills and motions that will address the infrastructural deficit in the State, especially in Ogun West.

“They should not pay lip service and shun equal development,” he said.

Oyedele added that a harmonious working relationship between the executive and legislative arms was key to promoting good governance, but cautioned that the lawmakers must not shy away from their oversight functions.

He thanked the people of Ipokia/Idiroko State constituency for supporting him at the keenly contested election, promising to stay committed to looking after the interests of the constituency.

His continued, “I want to reiterate that in my personal capacity, I would continue to create and facilitate diverse opportunities for my people in the areas of youth development, women economic emancipation and empowerment of the rural poor.”