Owa-Ale of Ikare joins his ancestors 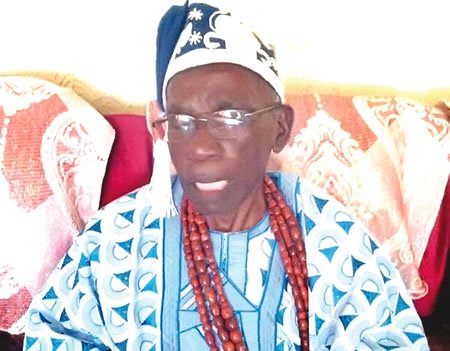 The late monarch ruled Ikare for 48 years and was 85 years old.
He was said to have died, on Tuesday morning, at his palace located at Okorun area of Ikare after a brief illness.

The late Owa-Ale of Ikare was the President of a group of Ondo traditional rulers under 130 Crown Obas and member of the State Council of Obas.

Residents of Ikare Akoko were said to have worn mournful looks even though an official announcement on the dead monarch was yet to be made.

He was a legal practitioner and first educated Owa-Ale to facilitate establishment of more than eight secondary schools between 1978 and 1982.

The late Ikare monarch was a former lay President of African Church worldwide.

He studied law in the United Kingdom before he returned to ascend the throne of his forefathers in 1972 as the 17th Owa-Ale.

When contacted, the Olona of Ikare, High Chief Rafiu Okunade, said that the official pronouncement would only be made after necessary traditional rites had been carried out in line with the community’s norms.

JUST IN: Akinwunmi Adesina sworn-in for another 5-yr term as AfDB President