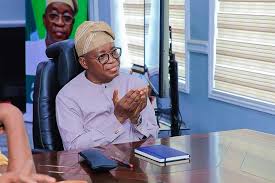 Members of the National Assembly from Osun State are currently at war with one another over the rising debt profile of the state.

The lawmakers are also fighting over how the state government is using a $20m World Bank grant for the upgrade of primary health centres in the state.

The issue degenerated into a war of words on Sunday between the All Progressives Congress Caucus and Senator Francis Fadahunsi of the Peoples Democratic Party (PDP).

Briefing journalists, in Abuja, the APC Caucus, led by Sen. Ajibola Bashiru, disagreed with the comments of Fadahunsi, who raised the alarm that the state had exceeded its debt threshold and had become too insolvent to borrow more.

Sen. Bashiru accused Fadahunsi of trying to create confusion in Osun State, adding that the claim by PDP lawmaker could not be substantiated with facts and figures.

Sen. Bashiru said, “The alarm being raised by Fadahunsi is unwarranted. It’s only meant to whip up sentiment that is not rooted in facts, except perhaps in favour of his failing political party.”

The senator also said contrary to Fadahunsi’s claim, the Osun State Government under former Governor Rauf Aregbesola and the incumbent Governor Gboyega Oyetola had exhibited accountability and prudence in the state’s finances.

According to him, part of that prudence was the reduction of the state’s 2020 budget to N82 billion in response to the challenges of the COVID-19 pandemic.

He said, “Whether you are open or not, you cannot escape mischievous remarks like those of Senator Fadahunsi. The government is transparent with the books audited quarterly and annually.”

He said, “Let’s forgive him. He was a Customs officer and he may not know how the world of loan works.

Even the Federal Government is taking loans. It is not taking loans that is bad; it is what you do with it that matters.”

But Fadahunsi maintained that additional loans amounted to mortgaging the future of Osun people.

He said, “With a total debt profile of over N170bn, Osun State currently ranks as the sixth most indebted state in Nigeria.

“Regarding the $20 million World Bank grant,  the APC caucus lied when it said the state government had used the money to establish primary health centres in all the wards in state.”

He challenged the APC Caucus to come forward with details of the contracts awarded for the primary health centres, the equipment and drugs bought as well as those engaged to work at the PHCs.