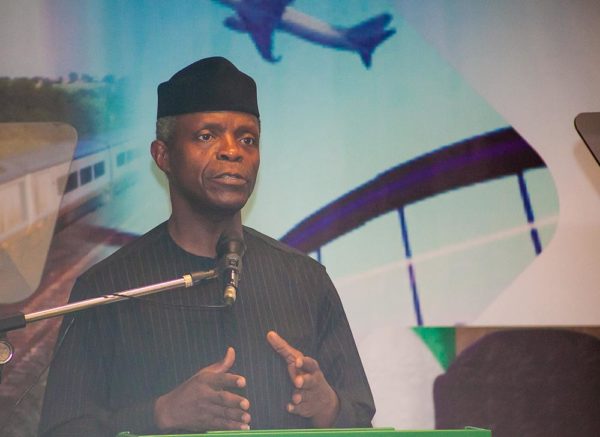 Vice President Yemi Osinbajo on Monday in New York said the huge development challenges facing Nigeria and the rest of Africa were “excellent opportunities for groundbreaking investments and innovation”.

He stated this as a guest at an interactive session hosted by the Council on Foreign Relations (CFR), a think-tank.

In his opening statement on the topic “Nigeria’s Economic Prospects”, the vice president hinged his discussion on four areas including population, and environment with respect to climate change.

He identified the other two areas as production especially agriculture, manufacturing and technology as well as security, and the challenges of terrorism, violent Islamic extremism, social exclusion and resource conflicts.

Osinbajo noted that what happened in the four areas in the continent in the coming years would impact positively or negatively on the fortunes of the world.

He said, “The doomsday scenario is as follows: Africa’s population grows exponentially, food production is not able to match population growth, a rise in transhuman conflicts due to shrinking vegetation and water.

“Lack of jobs and opportunity for a large  poorly educated youth population, leading to aggressive illegal migration, vulnerability to extremism and, the creation of a convenient breeding ground for extremist groups and a terrorist  launch pad to the rest of the world.

“A horrifying situation indeed, and possible if in the next three decades Africa drops the ball on these four indicators.

“Neither Africa nor the rest of the world can afford to have these scenarios playing out.”

Osinbajo stated that being the most populous nation in the continent, Nigeria had a critical role to play in those four areas.

According to him, it is not an exaggeration to say that as “Nigeria goes, so goes Africa”.

The vice president said although the challenges were huge, they were excellent opportunities for “ground-breaking” investments and innovation by both local and foreign players.

“So take population,  the mere fact that we will become the third  most populous nation in the world by 2050 and the 14th largest economy, means a huge market.

“When we opened up our telecoms sector for private investment 18 years ago, many thought, ‘yes, they have a large population but not a large enough middle class to buy and use mobile phones’.

“They were wrong. MTN and Econet took the plunge, and today market penetration for mobile phones is 114.9 per cent, which technically means almost everybody has a phone,” he said.

The vice president said Nigeria was trying to replicate the same feat in the power sector by opening it for investment in end-to-end power supply.

According to him, Power Africa, a USAID project, has made a commitment of 110 million Dollars between 2018 and 2023.

The fund is meant to provide transaction support to the entire electricity value-chain covering gas supply, distribution, transmission and generation activities, he explained.

“With our population, and a market-driven power sector, the next few years promise exciting prospects.

In agriculture, Nigeria boasts of the ninth largest stock of arable land in the world, and has become a world leader in cassava,  yam, sorghum, and millet production, he said.

He added that the country was on the verge of self sufficiency in paddy rice production, seeing greater interest  in agriculture and the agro-allied value chain.

Osinbajo emphasised that besides the export market, the country’s population presents a massive and lucrative domestic market.

“Carlos a major Mexican vegetable farmer came to Nigeria to do vegetables for export and found he was making far more money servicing the domestic market,” he said.

According to him, challenges in other areas such as manufacturing, environment, climate change and security were investment opportunities waiting to be explored.(NAN)