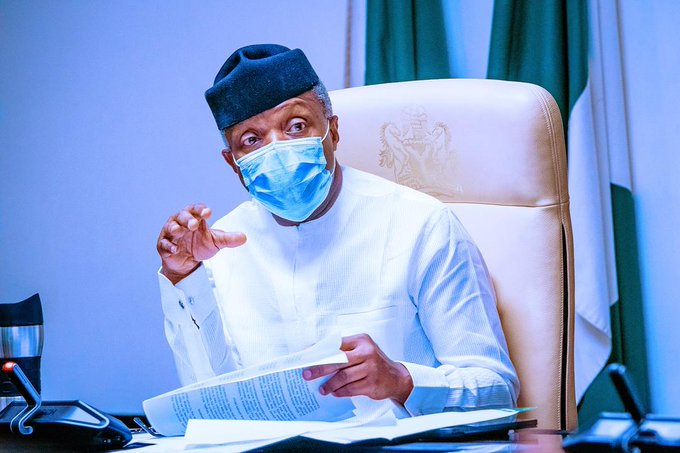 Vice President Yemi Osinbajo has charged heads of various enterprises to maintain sound ethical practices in order to ensure the sustainability and viability of their businesses.

Osinbajo disclosed this, on Tuesday ,in a statement issued by the Senior Special Assistant to the President on Media and Publicity, Office of the Vice President, Laolu Akande.

The statement stated that the country’s second in command disclosed this at the virtual 2020 Conference of the Institute of Directors.

He said the development and sustenance of viable enterprises were no longer dependent on the size of the corporation and related factors but on sound ethical practices imbibed by all stakeholders.

He was quoted in the statement as saying, “The frequent clashes between conscience and wrongful behaviour will eventually create a toxic work environment and destroy corporate objectives and visions.

“There is also enough history of how cutting corners and dishonesty ultimately bring down the whole enterprise.

“This we have seen in the facts behind the collapse of many Nigerian financial institutions from the nineties to the more recent occurrences in 2009.”

Osinbajo also noted that although it took a while for the institutions to unravel, the point was made that on the long run, unethical practices were unsustainable.

“Besides for quoted companies, the dangers of unethical behaviour are much graver,” he said.

The vice president added, “Local and international investors have greater access to information and more options than ever before, the slightest whiff of scandal or malfeasance can destroy value built up over the years.”

He said the local international examples of the collapse of companies thought to be too big to fail and brand names that had even once been associated with integrity and strong business ethics were strong reminders of just how brittle edifices built on weak business ethics were.

Flood displaces over 20,000 families in Anambra