Osinbajo and politics of vendetta and long-standing hate, by Steve Nwosu

Several years ago, an Igbo irredentist friend of mine told me about an ethnic group, which has no such thing as forgiveness in its DNA.

According to him, once you have offended any dyed-in-the-wool member(s) of this group, forget it. You’re cooked! You can roll on the ground, in apology, from here to Daura, Maiduguri, Sokoto, Lagos and back to Abeokuta, Port Harcourt, Ado-Ekiti, Umuahia, Kaduna, Jos and Makurdi, your punishment, as my wife would say, would still be in the cooler, waiting for you. Maybe, that’s why they say revenge is a dish that is best served cold.

Irrespective of what both the Bible and Qur’an preaches about forgiveness (and the numerous times we visit the holy lands of Israel and Saudi Arabia), there is usually no settling of the matter until he has taken his revenge – and seen by the public (especially, members of his group), as having had the last laugh on the matter. 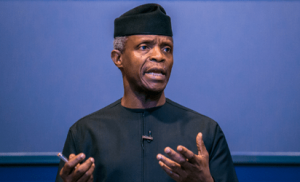 It does not matter if the revenge takes forever in coming; he would still have his revenge. And if he cannot exert that revenge in his lifetime, he would pass it on to his children, who would pass it on to their own children, and on and on until they take back their pound of flesh – usually with some drops of blood.

Because, this said ethnic group always had a sizeable presence in our armed forces, it has since infected the officers and men of these services. Yes, this culture of never forgiving a hurt also permeates our armed forces (and even some paramilitary agencies) today. That is why whenever the soldiers, or policemen, are convinced you have hurt their ego (especially in public), they cunningly pretend to accept your apology, but still invite you to the barracks (or station), seemingly to consummate the new rapprochement. Woe betide you if you honour that invitation. Even that was in those days, when they still pretended to be ‘officer and gentleman’, and did things with some finesse. These days, they have since thrown away the ‘gentleman’ toga, and would beat you to a pulp right there in public.

This culture of unforgivable sin has so persisted that it has today, crept into our philosophy of governance. And don’t think it’s only a Buhari thing – even though the present government has taken it a notch higher. Maybe, it’s all in the spirit of Next Level.

Today, rather than make progress with the rest of the forward-looking world, we preoccupy ourselves with repaying old hurts and settling old scores – including infractions committed as far back as 1966 and during the civil war. Payback time! Some grudges even go as far back as 1804.

And the victims are a legion. Dr. Ibe Kachikwu, who at one time held the dual office of GMD of the NNPC and Minister of State for Petroleum, immediately knew he was living on borrowed time the moment he began to ask ‘unnecessary’ questions about the goings-on at the oily house. And once he had committed that ‘original sin’, he signed his own political death warrant. From that day, none of the landmark innovations he brought to both the NNPC and the entire Nigerian petroleum industry mattered any more, even after he was eased out of direct control of the oil behemoth. And the moment Maikanti Baru retired from NNPC, Kachikwu was only tolerated till the end of the then federal executive council. It did not matter how much he was prepared to pay to placate the money-guzzling lynchpin in the Villa for his re-appointment. His fate was long sealed. The revenge might have taken a little while, but it still did come.

Embattled, now suspended, Head of Service, Winifred Oyo-Ita, did not seem to have learnt  from Kachikwu’s misadventure – maybe because she erroneously thought the then minister of state had gotten away with the ‘affront’.  She decided to ‘publicly’ speak up against a ‘pensionable’ abracadabra. Now, she has put her own pension in jeopardy. She learnt, rather too late, that though all animals are equal in this our anti-graft crusade, some animals are more equal.

Yes, she did put her foot down, but what she didn’t know was that the ground on which she was standing was, at best, a slippery surface, but it was actually quicksand.

Of course, I’m not saying that Oyo-Ita is clean – for nobody who has ever held public office in Nigeria is. It is even worse if such a person came to political office from the civil service.  Even if you didn’t steal, someone somewhere would have stolen in your name. There is, therefore, enough to put you in jail if the government in power actually desires to. The summary? Every past and present public/political office holder is a felon allowed to be outside of prison walls at the pleasure of the government in power.

It is also because government has the wherewithal to put anybody it so desires (including my poor self) in jail that somebody of the calibre of Yemi Osinbajo, Vice President, Professor of Law, Pastor, highly cerebral beloved of both the Jagaban and Baba Adeboye, has yet to understand what hit him. Where are the troubles coming from? Mamman Daura? The other Daura? Abba Kyari? The other man from Borno? Or the one from Yobe? Could it be their friend from Adamawa? Just where? Did Osinbajo take himself more seriously than he ought to? Did he exercise any powers he naively thought he had, on paper, but did not have in reality?

More importantly, are the travails of the VP some sort of shadow boxing, preparatory for an even bigger fight? Have the chickens come home to roost? Is the tiger now ready to make a feast of those who had been riding on its back? What is now the fate of these other people, who have stood against every aspiration of their kinsmen and constituents, just to please Buhari? Who will they run to when the avenging black angel comes for them?

Suddenly, the entire political and economic landscape is enveloped by this dark cloud of fear, apprehension and uncertainty, as the country slips into a regime of unforgivable sins, vendetta and long-standing hate.

All those who have had one or two uncomplimentary things to say about the sheriffs might do well to get ready for the sheriffs’ response. It doesn’t matter if you said it in 1983, 1985 or even 2003. There would be newspaper and magazine cuttings, archival videos as well as old social media posts that will stand in judgment against us all. We’re up against an elephant brain that forgets absolutely nothing. Or better still, it might not be able to repay nine out of 10 favours, but you can be sure that it will repay every hurt (every unguarded comment) in full measure.

And it is not only those in active partisan politics that have reason to worry. For even businesses are not spared. As the economy has effectively been captured by a seeming economic scorch-earth policy and deliberate centralisation of everything, those who naively thought they could stay away from politics and concentrate on their businesses have suddenly discovered how wrong they were. If you did not fund their campaign, it is automatically interpreted to mean you have sympathy for the opposition.

You can expect curious memos from the EFCC, FIRS or even AMCON. And if you are not big enough to feed yourself, let alone fund anybody’s campaign, you’ll still be punished for not investing your blood. Punished for daring to have an opinion when you have no money. Apart from maliciously tracking every kobo that enters your bank account, they’ll ensure that no government patronage comes your way. And in an economy where over 90 per cent of the spending is by government, you might as well call in the undertakers.

But then, how can we possibly move forward if we keep looking back?

Especially, when we’re not looking back to correct the mistakes of our dark ages, but to avenge mistakes our grandparents made out of genuine ignorance.