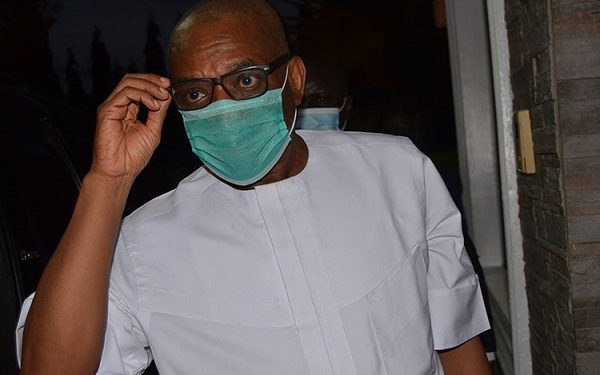 Chief Whip of the Senate, Orji Kalu, has proposed amendments to the Criminal Justice Act of 2015.

The bill titled ‘Administration of Criminal Justice Act 2015 (amendment) Bill’, 2020 was read for the first time on the floor of the Senate, on Wednesday.

The former Abia State governor was released from the Kuje Correctional Centre having spent about six months there. He was convicted and sentenced for money laundering to the tune of N7.1 billion by Lagos federal high court in December.

Sen. Kalu, who stood trial alongside Ude Udeogu, a former director of finance and account in Abia State, was sentenced by Justice Mohammed Idris, who as of then had been elevated to the court of appeal bench, in a legal tussle that started in 2007.

But, on May 8 this year, the supreme court, in a unanimous decision by a seven-member panel led by Justice Amina Augie, held that the Lagos Federal High Court lacked jurisdiction when it convicted Mr Kalu, his firm, Slok Nigeria Limited, and Mr Udeogu.

Upon his release, Mr Kalu, who described his ordeal as initial injustice that was caught and ultimately corrected, vowed to dedicate his time to ensure there will be justice for all Nigerians.

He lamented that over 70 per cent of the population in prison are awaiting trial.

“Justice for one man or for a few people will no longer be enough in this country. A system whereby over 70 per cent of all prison inmates population is made up of people awaiting trial cannot be allowed to continue.

“Situations where innocent people are falsely charged with murder just to get them out of the way does not dignify our country and cannot continue. Justice must now mean justice for all. That is my pledge to Nigerians,” he said in a statement.

Although the details of the proposed amendments have not been made public, it may not be unconnected to decongesting the prisons.

The lawmaker resumed legislative activities on June 9 and the introduction of this bill is his first legislative duty since resumption.