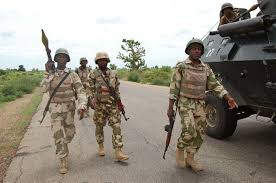 Special forces belonging to Operation Whirlstroke currently undergoing military operations in Benue, Nasarawa and Taraba states said they have so far killed 145 bandits, arrested 223 others while also recovering a total of 194 weapons.

Commander of the special forces under Operation Whirlstroke, Major General Adeyemi Yekini, disclosed this while on a courtesy call on Nasarawa State governor, Engineer Abdullahi .A. Sule at the Lafia Government House on Wednesday.

Major General Yekini also disclosed that the special forces put in place since May last year by the Force Headquarters to address incessant killings and other forms of banditry across the three states, recovered a total of 3, 683 ammunitions and one hand grenade.

The Commander assured that the era of banditry and criminality earlier prevailing across the three states have virtually came to an end, though occasional security challenges are to be expected, with members of Operation Whirlstroke taking immediate steps to address such breaches.

“The interplay of economic activities among these three different tribes along the River Benue valley, is the cause of the crises we are facing across these three states,” Major General Yekini said.

He added that though the special forces carried out more operations in Benue State more than in Nasarawa State, they recovered more weapons and arrested more bandits than the other states, which the military commander said was indicative of the security challenges in the state.

He assured the governor that they are on top of the security situation in Nasarawa State as well as Benue and Taraba states, adding that already, economic activities have picked up in areas where previously armed bandits used to even carry weapons and roam freely.

Major General Yekini further disclosed that their operation was not limited to military action but that they are also engaged in military/civilian activities in the belief that some of the lingering crises being faced across the three states cannot be solved by the military alone.

Responding, Engineer Abdullahi .A. Sule commended the special forces for the ability to trace the root cause of the lingering crisis, stressing that it is the only way to solve the problem.

Governor Sule noted that by taking care of everybody’s interest and giving everyone that sense of belonging, issues will definitely be resolved.

He disclosed that the security initiative started by the previous administration of Senator Umaru Tanko Al-makura in conjunction with the specials forces, have begun to yield results, with particularly the relative peace being currently enjoyed among the Igbira and Bassa people, with the latter asked to return home.

He pledged to support actives of Operation Whirlstroke within the state.