One killed, 2 escape as bid to buy cows from herdsmen ends in tragedy 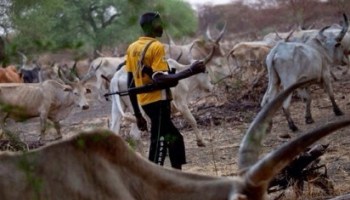 Suspected terrorists have attacked three persons while on a trip to buy cows from Fulani herdsmen in Ifite, Anambra State. One of the victims was killed while the two others miraculously escaped after being robbed.

Narrating their ordeal, one of the lucky survivors, Mr Celestine Nwakor from Nteje in Oyi Local Government Area (LGA) of Anambra State explained he and his colleagues identified as Chinonso Ajah from Nyeje and Energy from Umunya in the same Oyi LGA, wanted to buy cows and were led to a place in the bush where the herdsmen said their cattle were kept.

According to him, earlier in the morning he had a call with one of the herdsmen who gave him the direction on how to locate them with their cattle inside the bush. He added that the contact also sent his colleagues to meet and guide them to the location.

“My two colleagues, Chinonso and Energy were in front moving to the location on a motorcycle, while I was driving my truck following them behind with one of the herdsmen giving us direction.

“As we were going, we saw some cows; I asked the herdsman with me to know if it was there, and he said no we should keep going. We got to a place where I told him that I want to reverse my truck and continue back so that I wouldn’t find it difficult to reverse while going out. The herdsman persuaded me to keep going in until we got to a place where he said we should stop.

“Immediately we stopped, a group of boys numbering about 10 jumped out from the bush with guns and rushed towards us. In the process of the attack, Energy escaped and some of them pursued him to an unknown destination. The others surrounded me and Chinonso and robbed us of our belongings at gunpoint. They thereafter led us into the bush at gunpoint. As they were roaming about the bush, Chinonso miraculously escaped. They pursued him and left me alone in the bush and I took to my heels.”

The two victims, Celestine and Chinonso eventually reunited and shortly, they saw the butchered body of their colleague, Energy, in a pool of blood.

Confirming the incident, the Police Public Relations Officer Anambra Police Command, DSP Ikenna Tochuchu said that three suspects had been arrested in connection with the incident, while the investigation was ongoing.

“We have three suspects in custody, and investigation is ongoing please,” Tochuchu stated.

The Traditional Ruler of Umueri Community, Igwe Ben Emeka also confirmed the incident in a telephone interview with The Nigerian Xpress reporter and revealed that it happened on Wednesday, August 10, 2022.

Igwe Emeka also confirmed that arrests had been made, but that information was still sketchy.