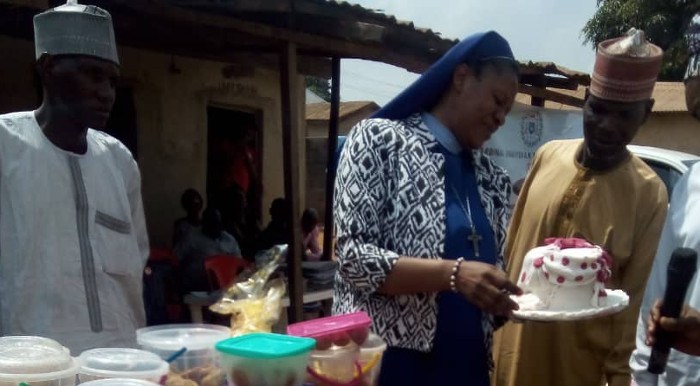 The Cardinal Onaiyekan Foundation for Peace (COFP) in partnership with the Czech Republic Embassy have constructed three units of toilets in the Internally Displaced Persons (IDPs) Camp in Area 1, Abuja.

Rev. Sis. Agatha Chikelue, the Executive Director, COFP, disclosed this while handing over the toilets to the IDPs in Abuja on Friday.

Chikelue, who spoke with the News Agency of Nigeria (NAN) at the event, said that prior to the construction of the toilets, the IDPs defecate in the open, whenever nature called.

“We have been working in this IDP camp for the past three years, and I am very ashamed to tell you that since we have been coming, we found out they do not have toilets.

“When we are training the women and the children in the learning centre, you see them moving into the bush to ease themselves.

“I did not need to be told that these people seriously need good toilets and what we had then could not complete the toilet project.

“Therefore, we approached the Czech Embassy to ask if they could support us with the project and they generously supported us and that is what we have here today,’’ she said.

Chikelue said the toilets would not only provide a convenience for the IDPs but would also help them improve their sanitary conditions, and in turn help them to live healthier and happier lives.

According to her, I feel so happy and fulfilled that we have stepped beyond empowering the women here to providing a place for them to ease themselves.

“In the last three years, we have trained not less than 150 women from this camp in different vocational skills,’’ the COPF director added.

Chikelue appealed to the IDPs to maintain the toilets by keeping them clean at all times in order to live healthy lives.

She called on the government to do more for the IDPs, saying it was their responsibility to provide the basics such as water, toilets, and bathrooms, for them to live a conducive life in the camps.

Chikelue also called on well-meaning Nigerians and non-governmental organisations to also support the IDPs in whatever way they could.

Ms. Beata Matusikova, Economic and Commercial Affairs, Embassy of the Czech Republic in Abuja, who spoke with NAN, said the embassy felt that it needed to focus on IDP camps.

“Despite other projects we did with the foundation we thought that focusing on the IDP camps and the destiny of the people here is very important.

“That is why we decided to partner with COFP and participate with this little help in the IDPs camp in Abuja and we see it is really of great importance to the people .

“We are ready to partner with the foundation and participate on other projects in the future. Hopefully it will be something in this IDPs camp as well,’’ Matusikova said.

She disclosed that some other projects the embassy had partnered with the foundation included building of two boreholes in Ampere community in Kanke Local Government Area of Plateau.

Matusikova added that it had also partnered in educational and empowerment projects for youths living above addiction with COPF.

The Chairman of the camp, Ibrahim Amodu thanked the foundation and the Czech embassy for the new toilets on behalf of the IDPs and prayed God to bless them.

Amodu said COFP in spite of being a Christian organisation had helped empower both Muslims and Christians in the camp in the last three years. (NAN)