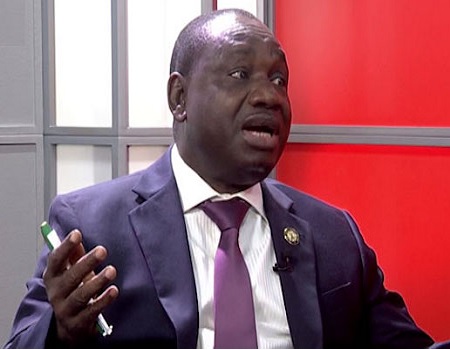 Mr. Gbenga Omotoso is the Lagos State Commissioner for Information and Strategy. In this interview monitored on ARISE TV Morning Show programme, the vocal commissioner reeled out achievements of his principal, Governor Babajide Olusola Sanwo-Olu, asserting that, he is working.

I am here to tell you that Lagosians know that Mr. Babajide Sanwo-Olu has done a lot. About three days ago, we commissioned 15 brand new schools, about 150 blocks of classrooms and boarding facilities with 1, 386 bed spaces for pupils. If you look at the schools we are commissioning, they are iconic schools. Vetland is a 12-classroom school with modern facilities, touch-screen blackboard and modern equipment all over the place, the first in West Africa, I dare say.

It is built with containers; that is Vetland School in Agege. Then, the Elemoro School is an 18-classroom school with modern facilities, with a lab, sick bay, sporting facilities (the pitch is as good as the one used by the Super Eagles).

We have empowered 18,000 teachers, training them in how to use technology to teach. In addition, about 450,000 pupils have been given tablets for them to be able to improve in their education. We renovated 243 libraries. We have two brand new universities (our universities never went on strike when others were on strike). Today, everybody wants to come to Lagos State University (LASU).

In housing, we have done about 15 projects. We have done housing units in Idale-Badagry, Sangotedo, Ikorodu, Ibeshe, Igbogbo, Igando and so many other places. Here on Victoria Island, we have done a lot in Igbokusu, Ilupeju, Lekki. Therefore, anyone who is befuddled by his own problems and is not seeing all of these surely has a problem.

Affordability of the houses to the masses

Lagos has a population of about 25 million people; housing such population, by any standard, is no joke. Of the housing estates that we build, 20% are reserved for public servants and workers, civil servants, some of whom pay over a long period. For others to get these houses, all you need to do is go to the Ministry of Housing, get the form and fill it. There have been testimonies of people, who had no connection to anyone in government and they were given allocations.

On roads, we have built 970 roads; Public Works Corporation has rehabilitated 650 inner roads. We have done 34 roads in Kosofe, Somolu, Victoria Island and Ikoyi.  We are also building 15 bridges and most of them have been completed. We have done six roundabouts to ease gridlock on Allen Avenue, Lekki Expressway, including Lekki Roundabout 1 and 2, Ikotun and Maryland for traffic to move in those areas. We have inaugurated the Oshodi-Abule-Egba BRT Lane. In Ojokoro, 31 roads were commissioned in one day. This is just to mention a few.

On water, we are on the verge of completing the Adiyan Water Works that is going to supply 70,000 gallons of water per day.

We have done a lot on EndSARS. We have paid over N400 million to victims of police brutality, as recommended by the panel. Lagos paid the highest compensation. All the aspects that concern the government have been taken care of.

Few days ago, we opened the Peace Park as a mark of recognition to all those who have been struggling for peace in all parts of Lagos.

Well, there is a Yoruba proverb that says no matter how good a hunter is, he can’t kill a big game in the view of his enemy, who will say, ‘Is this the small rat he killed and he’s calling it an elephant?’ The Blue Line is the only rail line in Africa that has been built over water and the only line in West Africa that is going to be running on its own electricity, without public electricity. We are responsible and accountable.

The Blue Line will be commuting 500, 000 passengers per day, shortening to 25 minutes a journey of about two hours from Marina to Mile 2.

The Red Line will be commuting passengers from Oyingbo through Agbado and will shorten the journey of about four hours to about 35 minutes. Nigerian banks are the ones that are sponsoring these projects and backing us through the Federal Government.

As for our debts, there is a debt to GDP ratio threshold set by the Central Bank and the World Bank, 30% and 40%, I think. Lagos is doing less than 14%. So, we still have enough room to borrow. We borrow for capital projects, which generate employment and not for recurrent expenditure. When we had the N100 million bond, it was over-subscribed. Very soon, we will be going to the market to take another bond and it’s going to be over-subscribed.

In health, Lagos spearheaded the national response to COVID-19.  The story of how Lagos tackled COVID-19 is all over the world and the state is seen as the example of how such a public health emergency should be tackled.

We are renovating our General Hospitals on Harvey Road in Ebute-Meta, in Odan and in Isolo; we are building a new General Hospital that has not been built for decades in Ojo. Very soon, we are going to have a 500-bed Mental Hospital in Ketu-Ejinrin and a Research Centre in Yaba. We are building hostels for our doctors in Gbagada and Ikeja.

Around Eti-Osa, we have done a lot about health. There are about 15 Primary Health Care Centres in Eti-Osa. A brand new Mother and Child hospital has been built in Eti-Osa and it’s part of the hospitals that have reduced infant mortality in Lagos State.

You will agree with me that flooding has become a global phenomenon. Many cities across the world and in Nigeria are submerged. We have about eight rivers, discharging into Lagos: Rivers Ogun, Osun, Ajara and Orolu, among others. Anytime there is an increase of the volume of water in the lagoon, and the water from River Ogun or Osun is released, there will naturally be flooding. Therefore, that we are not experiencing the flood that other cities are experiencing is a reflection of the good work the government has been doing. When rain falls in Lagos, the flash flood recedes immediately after. Lagosians should join hands with government to ensure a flood-free society.

Anyone who thinks Mr. Babajide Sanwo-Olu is not focused is only indulging in beer parlour talk. Lagos runs on autopilot. We have a team of very competent people. This is the season of politics. We have a system in Lagos that is working and it is credible. The process of arriving at the preferred bidders for the Fourth Mainland Bridge is getting to the conclusion stage. It is a project that is very dear to the heart of the governor; it is going to be done through Private-Public Participation (PPP).

The Lekki Airport will sit on about 3, 500 acres and the cost is about $900 million. It will be done on the basis of public and private partnership. It is going to be sited on about10 kilometres away from what we know as the Lekki Free Trade Zone now. The airport will take pressure off the Murtala Muhammed Airport.

Shutting down of Alaba International Market

If Governor Nyesom Wike, a lawyer, a frontline politician and a performer, was in Lagos to endorse Governor Sanwo-Olu and some people are not comfortable with that, I think they are just psychologically traumatised by that. All I can say is that Governor Sanwo-Olu will continue to do his work – to the admiration of all.

On Alaba Market, what happened was a quarrel between two people and then it escalated and because the owners of the market did not want it to escalate beyond the level it had gotten to, they shut down the market.

It has nothing to do with government or politics. Governor Sanwo-Olu is popular among Alaba traders.

Out of school children

I do not know where that statistics (of 2 million) is coming from, but I know that during COVID-19, we lost about 22,000 pupils who did not return to school, but I am proud to say today that we have brought back 17,000 of them.

Therefore, if there are 2 million pupils out of school; it is not because they do not have the facilities; it’s not because we cannot provide them very good schools. We are using Non-Governmental Organizations (NGOs) and some of our agencies to appeal to parents to bring back their children.

He will be focusing on health and education. The Blue Line and the Red Line will be concluded by the end of the year and, by the first quarter of next year, they will begin passenger operations. The Massey Street Pediatric Hospital will also be on the governor’s priority list.

It will be the biggest children’s hospital in Africa. In addition, the Lekki-Epe Expressway is over 90% completed; the same goes for Oba Sekumade Road, Agric-Isawo Road, Ikorodu and Bola Tinubu-Igbogbo Road, Ikorodu, among others. The governor will ensure the completion of all these roads and other key projects – to the joy of all Lagosians. In addition, Mr. Governor will like to concentrate on the research centre in Yaba so that when we have a public health problem, such as COVID-19, we won’t be asking the West for vaccines.

The 500-bed Mental Health Centre in Ketu-Ejinrin is also on the priority list.