Okorocha explains reasons for establishment of 12 tertiary institutions in Imo 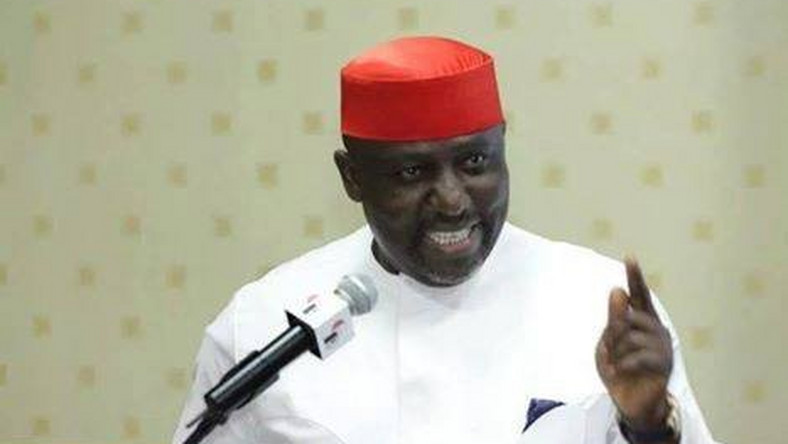 Governor Rochas Okorocha of Imo State has explained the reasons behind the establishment of 12 new tertiary institutions sited in some localities across the state.

One of the reasons, he said, was to stop the lingering incident of denial of Imo children admission into tertiary institutions in the country.

While the two new Colleges of Educations also established by the state government.

Before the inception of the present outgoing APC administration in Imo State, in 2011, Imo State, could only boast of two tertiary institutions which include Imo State University Owerri and Imo Polytechnics Umuagwo.

Addressing journalists at the Government House, Governor Rochas Okorocha said that the new tertiary institutions would take care of Imo indigenes and other Nigerians qualified for University admissions yearly but has always been denied admission because of the limited spaces in Imo State University and the issue of Catchment area in other Universities across the country.

The governor said that most of the Students who had desired for University education had been frustrated out of their life dream with this ugly development.

He said that putting together the two figures, “You would discover that in 2019 Imo have almost one million JAMB applicants who are hungry for University education.

“And you quickly discovered that less than ten percent of this number must have been offered admission while the rest would continue to wait.”

He stressed further that Imo State University is free for all Imo indigenes while the new Universities are Public Private Partnership (PPP) driven which would give the power to source for funds through various means like payment of fees to sustain them.

According to the governor, “What government has done is to provide the infrastructure and buildings to set up the Universities while the major partners will see to the day to day running of the institutions stressing that they will charge fees to run the institution.”

He explained how the state government intends to kick off the universities so far established adding that the projects have been ongoing for over three years now with the Imo State House of Assembly making the necessary laws for the establishment of these Universities in Imo State.

He said that the site for the University of Agriculture and Environmental Services Aboh/Ngor-Okpala was chosen by Dee Sam Mbakwe over 35 years ago, intended for Imo State University (IMSU) adding that the University has led to the conversion of Imo State Polytechnic Umuagwo to take the status of a full-fledged University.

He said that right now, Imo State Polytechnic is now University of Agriculture and Environmental Sciences with Campuses in Aboh/Ngor-Okpala and Umuagwo adding that it will now be a degree issuing University.

The governor further stated that the tertiary institutions are ready for academic activities expressed the hope that the University of Medical Sciences at Ogboko, was established primarily for medical matters, to produce young doctors and lab Scientists.

The governor stated that what gave government courage to embark on this project is the fact that there is 27 new 200 bed hospital, located in each of the 27 LGA which will serve as outreach centres for the Medical Students in the University.

Adding that the Marine University in Oguta State under Construction.

READ ALSO: Divorcee drags ex-husband to court, says she may be pregnant

The governor assured that with these institutions coming into place, the trauma and difficulties faced by Jambites in the State would be a thing of the past and Imo would recover its glory as number one in the education industry in Nigeria adding that what government did was to have investors into educational projects to either invest with their resources or invest in the management of the Institutions.

Governor Okorocha also expressed joy that many organizations, including churches, “Have responded to our request insisting that the tertiary institutions are waiting accreditation from NUC to commence academic session.”

He re-emphasise that because of the structure of these universities as PPP Universities, they are not free for those seeking for admission excerpt in Imo State University which is 100 per cent owned by Imo State Government that provides free tuition education for the indigenes of the State as has been the case for the past seven years.

The governor used the forum to inaugurate the Implementation Committee on the New Tertiary Institutions with Prof. Chima Iwuchukwu as chairman.