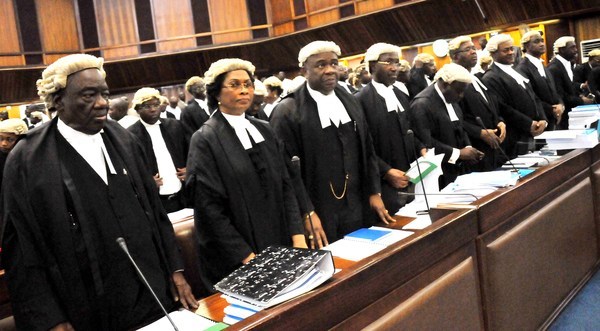 The Ogun State Ministry of Justice has said that it would address the shortage of Lawyers and staff of the Ministry, which has continued to consume its Man hour, human capacity and delaying of justice for the members of public.

The state Solicitor-General and Permanent Secretary, Ministry of Justice, Mrs. Yetunde Oresanya, stated this at the 2020 Budget Defense before the state’s lawmakers, at the House of Assembly Complex, Oke-Mosan, Abeokuta, the state capital.

Oresanya, who was represented by the Director, Public Prosecutors, Mr. Adeyemi Adewole, explained further that the construction of Information, Communication Technology (ICT), facilities in the Ministry has become imperative, in order to boost  and proper projection of the justice sector and the state government as well.

Analysing the Ministry’s Budget proposal to the Lawmakers, Adewole said a total N1.46B was proposed for the 2020 fiscal year, while the Current expenditure would gulped N1.18B, representing 80.9 percent and the Capital Expenditure estimated to N279M, representing 19.1 percent, putting N350m to the targeted Internally Generated Revenue (IGR) of the Ministry.

He added that both personnel cost and overhead cost of the Ministry would gulped N600M and N582M respectively, saying that the construction of out station at Ilaro, Sagamu would be implemented and the total overhauling of its Ijebu-Ode out station.

He said that the reviewing of the state’s law to meet up proper standard would also implemented in the budget proposal, noting that it was reviewed last in 2006 under the administration of Otunba Gbenga Daniel, which would be published for the public.

Adewole said the Ministry would procure additional five (5) vehicles, two (2) cards and three (3) buses to timely convey lawyers and other staff to their various work places, adding that training and retraining of staff would also not left out.

He also said that e-library would be put in place for the law officers and other staff in the state, so as to make references to their defence and when necessary to strengthen the staff capacity, saying that it was a major trade of lawyers in the justice dispensation.

The House of Assembly Chairman, Finance and Appropriation, Hon. Olakunle Sobunkanla and Chairman House Committee on Justice, Ethics and Public Petition, Hon. Solomon Osho advised the Ministry to work hard, in order to achieve the set goals, while urging it to put more effort on quick dispensation of justice, training and retraining of its workforces.