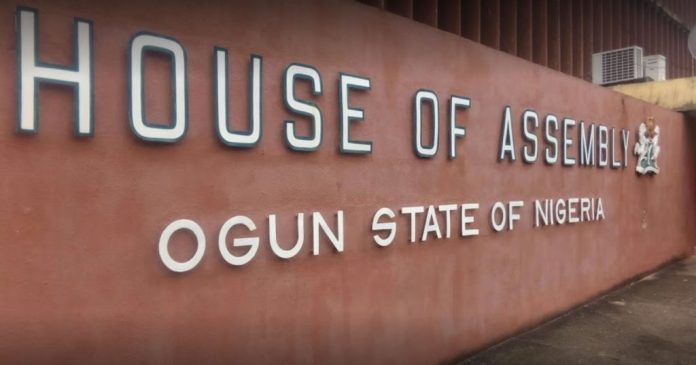 The Ogun House of Assembly had passed the state’s 2020 Appropriation Bill of N449.97 billion into law.

Mr Olakunle Sobukanla (APC -Ikenne), the Chairman, House Committee on Finance and Appropriation, had earlier during plenary on Friday in Abeokuta presented the report of his committee on the budget before the whole House.

Sobukanla said that the appropriation bill had an adjustment to the capital expenditure leading to an increment of N2.1 billion for capital projects.

According to him, the adjustment increased the capital expenditure from N269.13 billion to N271.23 billion.

The lawmaker added that the recurrent expenditure was reduced from N154.89 billion to N152.79 billion or a reduction of N2.1 billion.

He stated that the N2.1 billion removed from the recurrent expenditure was added to the capital expenditure.

Sobukanla, thereafter, moved the motion for the adoption of the report, which was seconded by Sylvester Abiodun (PDP-Ijebu North 1), and unanimously supported by all the lawmakers through a voice vote.

The bill was thereafter read clause-by-clause before the lawmakers by the Speaker, Olakunle Oluomo (APC—Ifo 1).

NAN reports that Governor Dapo Abiodun had on December 3 presented the budget proposal of N449.974 billion for the 2020 fiscal year before the state legislature for consideration.

The governor christened the 2020 fiscal appropriation ‘’Budget to build our future together’’.

Giving the breakdown of the budget, the governor said N269.13 billion, representing 60.31 per cent, was proposed for capital projects, while N180.84 billion or 39.69 per cent, was set aside for recurrent expenditure.

He said allocation for salaries and allowances stood at N83.24 billion.

He said pension and gratuities will take N25.94 billion, representing 18 per cent of total expenditure with the balance of N71.66 billion or 16 per cent of the total budget earmarked for overhead cost.

Abiodun said the government would formulate policy for a holistic actualisation of the budget towards localising the Sustainable Development Goals (SDGs) through public-private partnership initiatives.

He said the government had put in place a mechanism for a workable public financial management system to eliminate leakages and ensure efficient and judicious use of resources.