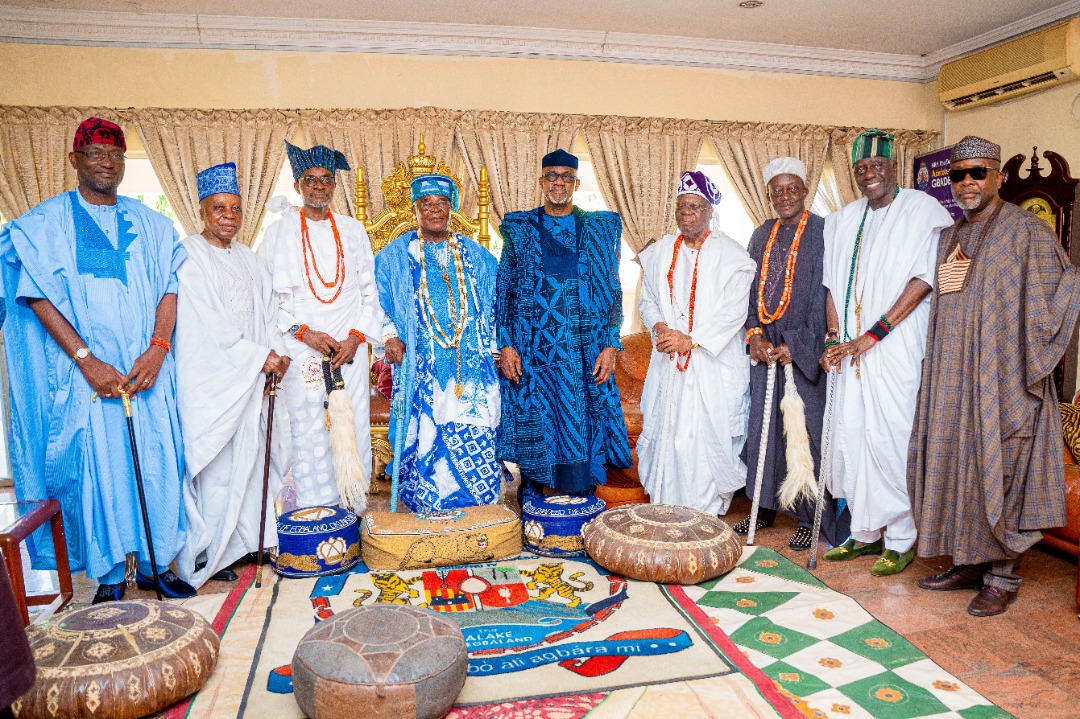 Share
By Razaq Bamidele
All the 54 traditional rulers that make up the Egba Traditional Council, on Wednesday, unanimously endorsed the Ogun State Governor, Prince Dapo Abiodun, for second term in office.
President of the Council, the Alake and Paramount Ruler of Egbaland, Oba Adedotun Aremu Gbadebo, in an announcement in his palace hinged the monarchs’ support for the governor’s re-election bid on his sterling performance since he assumed office in 2019.
The Alake, who was surrounded by other 53 monarchs, said Governor Abiodun has performed creditably and therefore deserves a second term to finish what he has started.
Oba Gbadebo noted that in the last sixteen years, governors in the state have served two terms in office, stressing that; “Governor Abiodun, having done so well also deserves a second term.
“The governor has done very well. In the last 16 years, two governors have done second terms, why is our governor who has done so well will not do a second term?” Alake queried.
READ ALSO: http://Lagos to mitigate water-borne diseases through effective regulation of faecal sludge management
While appreciating the governor for completing some abandoned projects in Egbaland and helping to complete the Traditional Council’s Hall in the Alake’s Palace, called on the state government to construct the road leading to the railway station in Abeokuta.
In his contribution, the Osile of Oke-Ona Egba, Oba Adedapo Tejuoso, said the entire people and traditional rulers in Egbaland are in full support of the governor’s second term bid, while the Olowu of Owu, Oba Saka Matemilola and the Agura of Gbagura, Oba Sobur Bakre, expressed confidence that the governor would perform better if given another opportunity.
While responding, Governor Abiodun expressed his gratitude to the monarchs for confidence they have in his capacity to move Ogun State to greater heights.
According to him, his administration has been fair in the distribution of projects as well as appointments to all parts of the state.
While enumerating some of the projects executed in the Ogun Central Senatorial District, the governor said plans were on to finalize the concession, operate and transfer of the supposed 250 bed hospital to an international hospital management company that would complete and manage it.
“The hospital is a world class health care facility of excellence that will attract health tourism from all over the south-west and Nigeria.
“We are working assiduously on the establishment of the Kajola Dry Port and Wasimi Export and Logistics Hub which will decongest Lagos port, thereby making it more efficient and further create an enabling environment for  industries and manufacturers in Ogun.
“We will soon begin the urban regeneration of Ibara GRA and in Mowe-Ofada. We are completing or have completed all inherited projects that are of economic importance to our people in line with our promises”, the governor noted.
He described traditional rulers as the link between the Divine Being and the world; custodian of African culture who have assisted in maintaining peace in their various communities.
“I commend our Royal Fathers from the Egba Traditional Council who have continued to keep the flag flying for the progress and development of Egbaland and by extension, Ogun State.  This endorsement of our candidature for another term of four years is another appreciation of our untiring efforts in developing all sectors of our State economy across the three senatorial districts of our state”, he pointed out.
The governor added that the endorsement is another affirmation of the progress the state has recorded in the last three and half years, emphasizing that the success story of his administration could not be documented without the support received from the people of Egbaland.
While saying that the endorsement would motivate him to do more, he pleaded with the people to play politics without bitterness, as politics is not a do-or-die affair.
Related Posts

2023 Presidency not about ethnicity but fairness to others –…

I approved Naira redesign to tackle hoarding banknotes outside…

2023 Presidency not about ethnicity but fairness to others – Pa Adebanjo…