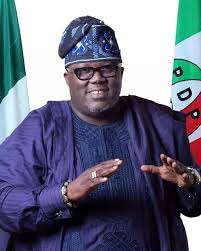 Chairman of the People’s Democratic Party (PDP), in Lagos State, Engr. Adedeji Doherty, has told the Governor Babajide Sanwo-Olu-led government to tread with caution in dealing with planned by some youths to stage a peaceful protest at the Lekki Toll Gate over the decision of the Judicial Panel of Inquiry and Restitution to investigate cases of police brutality in the State, directing the commencement of operations at the toll plaza.

The PDP chairman said that the Lagos State Government must first come out publicly to inform Lagosians about the Lekki Concession Company (LCC) and details of the toll gate contract, beneficiaries, owners of the business and other grey areas of the transactions, so as to clear the air on the insinuation that money from the toll gate was going into the pocket of a single individual.

Engr. Doherty stated that, “In view of the Freedom of Information (FOI) bill, the state government should inform Lagosians of the significance and importance of the tollgate and why it must commence operations at this sensitive time especially as it relates to the COVID-19 pandemic that is ravaging the country especially Lagos.”

He described as insensitive and unfair, decision of the government to re-introduce daily toll charges on its citizens at this time.

The statement read in part, “The attention of the Lagos State PDP has been drawn disturbing security reports as regarding plan by some youths in the State, under the aegis of #OccupyLekkiTollgate and #DefendLagos to protest at the Lekki Toll on February 13, 2021.

Reports have it that these protests would be met with huge police and military presence.

“Recall that the Justice Doris Okuwobi led Judicial Panel of Inquiry and Restitution to investigate cases of police brutality in the State, had voted in favour of the commencement of operations at the toll gate. This,  the youths representatives on the panel vehemently rejected, saying they were not carried along and that the decision is ill-timed and insensitive.

“It is on record that, the Lekki/Epe expressway was started by the Lateef Jakande administration and completed up to the Eleko Junction, while subsequent administrations extended the road to Epe.

“This expressway had always been a toll free highway built with tax payers funds and as such , should no longer be tolled

Furthermore, it is the only highway available to communities on this axis with no alternative routes.

“This very important road was given to Lekki Concession Company (LCC) for a period of 30 years, but the question remains, why should already constructed expressway attract a toll gate and an unnecessary consultancy costs?

“It should also be noted that the LCC was a hurriedly contrived company established to oversee the Lekki toll concession business with no direct or positive economic impact on the communities or road users as the Lagos state Government also has a ministry that maintains Lagos Roads Daily.

“It should also be noted that the state government collects all forms of taxes from people living in communities along this axis. These taxes include, Land Use charges, development taxes from residents on both sides of the road, taxes on public transportation collected by men of the NURTW, company income taxes, VAT, consumption taxes, radio/TV taxes, hotel and tourism taxes, advertisement taxes, vehicle taxes and all other forms of taxes.

“Most importantly, with the economic situation in the country today, coupled with the Covid-19 pandemic related situations, Lagosians should not be stretched further with the re-introduction of toll collection at both the Lekki and Bourdillon ends of the state.”