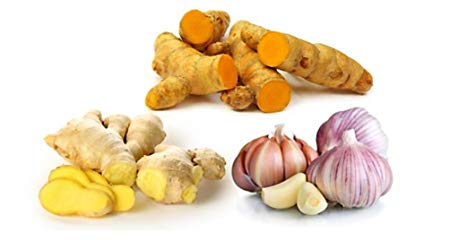 A nutritionist, Mrs Ezinne Njoku-Obi, has advised Nigerians to embrace healthier and natural alternatives and condiments  while preparing  their meals and stews.

The chef told the News Agency of Nigeria (NAN) in Lagos that Nigerians should be seasoning their meals, stews and soups with aromatic herbs such as: ginger, garlic, turmeric and the likes.

She said that they should desist from using processed stock cubes and other artificial seasonings or condiments for them to sustain their healthy eating habits.

“When you talk about healthy alternatives for cooking, you have to start with the foundation of the food and you can achieve that by using what we call flavourful foundation.

“This is the use of aromatic herbs and the particular bones for the type of protein you want to develop in your body system.

“If it is chicken you use, chicken bone; if it is fish or beef, you use the bones.

“If you are not allowed to take protein, you use aromatic vegetables and that form the foundation of your food.’’

She said that by doing that you would be automatically adding flavours to your food.

She said, “You do not need to add a lot of salt or processed stock cubes and all that into your meal or sauce.’’

The nutritionist said that it was possible to make meals without adding artificial condiments noting, that “healthy eating is a choice’’.

“There is a recipe for every meal; if you follow the recipe, you will get the same taste,’’ she said.

The nutritionist said that she had begun to create awareness on healthy alternatives in preparing meals and that she was doing it in a one-reach-one approach.

She said that if you should educate them on it using the social media platforms, they would always say that they still believed in their street food.

She said that through physical contact, she had been able to convince many and changed their perceptions.

“I am not against street food, I have friends that sell food and I tell them that they can prepare such food differently.

“Some people have changed but they still insist on using processed stock cubes,’’ she said.

Njoku-Obi also advised people against the consumption of excess cooking oil and urged them to start shifting to healthier cooking by using small quantity or not none at all.

“I am reaching out more to the younger generation. I train school leavers and they have begun to embrace the concept.’’

She said that some of them had also started to experiment what she had taught them at home for their parents to see.

She said that some parents that used to complain before that foods prepared by their children without adding stock cubes were beginning to embrace the change.

The nutritionist said that such parents had begun to find such meals tasty and delicious.

She said that by preaching the change from one person to another, some members of the public were gradually changing from their old ways of doing things.

“That is why we call it healthy living, it is a choice and a journey, not a destination.

“It is something you do until you die.

“Every day too, I am discovering new things, and better ways of cooking.’’

Njoku-Obi also said that on some occasions when people cook their stews, they might not need to add the cooking oil.

The nutritionist advised those who eat their chickens without removing their skins not to always add cooking oil to such stews.

She said, “I tell them that they do not need to add cooking oil as the skin of the chicken will generate enough cooking oil for such a stew.

“You notice that after making your stew with chicken that has its skin on, the amount of cooking oil in your stew becomes excessive.’’

She said that wives would be saving their cooking oil by restricting themselves to the quantity generated from the skins of their chickens.

“So, you take it one step at a time until you get to where you can convince people to always remove the skins of  chickens before cooking,’’ she said. (NAN)