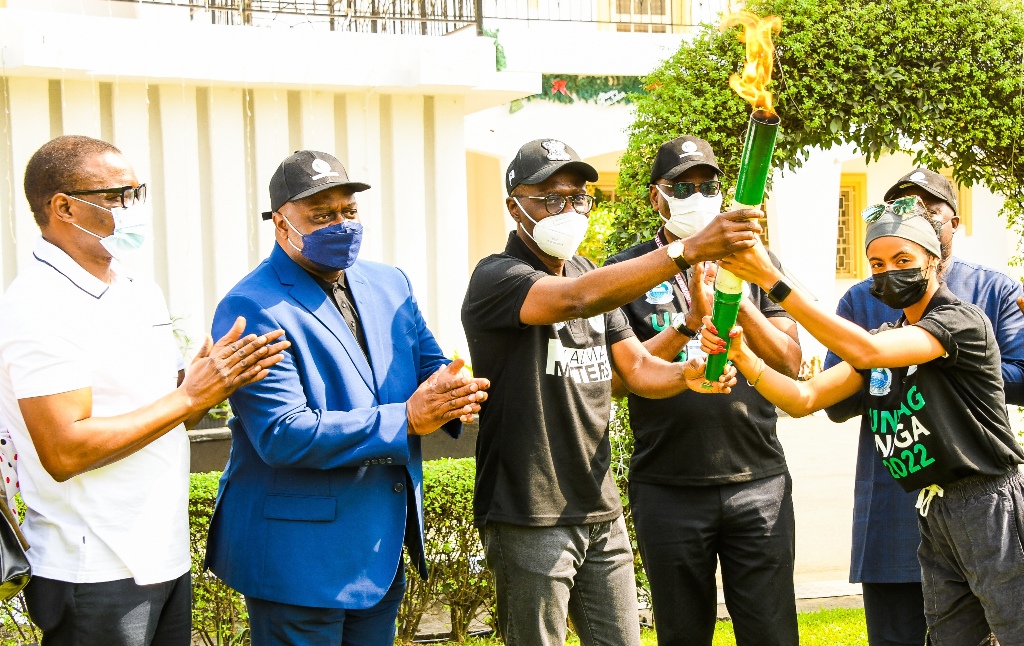 Governor Babajide Sanwo-Olu of Lagos State, on Wednesday, said his administration would continue to use sports as a rallying point to project the tourism potentials of the state.

He said his administration would provide an enabling environment for sports and youth development as well as utilise the tourism potentials of Lagos to build future leaders.

Governor Sanwo-Olu while receiving the 2022 Nigerian Universities Games (NUGA) “Torch of Unity” at Lagos House Marina on Wednesday, promised that Lagos State Government would support the games with human and material resources.

The Torch of Unity was presented by a delegation from the University of Lagos (UNILAG), the host university, made up of the institution’s Pro-Chancellor, Senator Lanre Tejuoso and Vice-Chancellor of UNILAG, Prof. Toyin Ogundipe, among other top management staff of the institution.

The Nigerian Universities Games, scheduled to hold between March 16 and 26, will be city games as sports competitions would take place inside the UNILAG campus and other sports facilities in Lagos State.

Governor Sanwo-Olu congratulated the management of UNILAG for winning the hosting rights of NUGA 2022, saying the sports competition would further bring about unity and togetherness among students and youths from different parts of Nigeria as over 10,000 participants are expected to participate in the event.

The governor, who is an alumnus of the University of Lagos, charged the school to win the 26th edition of the Nigerian Universities Games.

He also implored students and youths to use NUGA 2022 as a platform to discuss more on what unites Nigeria and ways of bringing peace and building the nation.

Speaking on his administration’s commitment to sports and youth development, Governor Sanwo-Olu disclosed that currently, the state government is constructing nine sporting facilities across the state to boost sportsmanship and unity.

Prof. Ogundipe appealed to Lagos State Government to support NUGA 2022 through the provision of security and transportation facilities, as well as other state facilities that can be used during the event.

He also appealed to the Ministry of Tourism to assist in ensuring that visitors feel the tourist potential of Lagos State, noting that the Nigerian Universities Games is not only about UNILAG but Lagos State.

Electoral Act (Amendment) Bill: Senate to consult Reps on next line of action –…