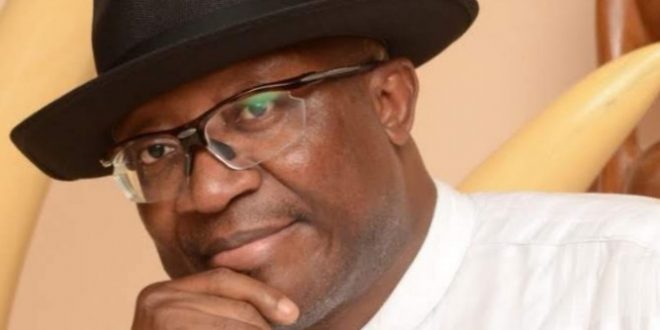 The Senior Advocate of Nigeria (SAN) also urged the good people of Bayelsa State to reject the All Progressives Congress (APC) in the November 16 governorship election, saying, PDP remains the best party for inclusiveness and ultimately the protection of the interests of the minority groups like the Ijaw nation.

“Rather than gravitate into a new party that has an uncertain direction, I strongly believe our remit is to stay, reform and rebuild the PDP into the party it should be. Bayelsa going into the hand of the opposition at this stage is too big a gamble for Bayelsans and is not a chance they should take,’’ Chief Okoli cautioned.

RAZAQ BAMIDELE brings the excerpts from the interaction:

As someone who has participated in the political process, what is your take on the Saturday governorship election?

Like every election in Nigeria, it is as though the entire world is going to come crashing down on that day of election and the heavens will fall on the weight of the political gladiators and their supporters. As a society, we generate too much negative energy for what should ordinarily be a contest to herald positive development for the people. We really must find a way to mature our politics.

Why do you think Bayelsa still needs PDP?

My opinion still remains that PDP, despite its many internal failings remains the best party for inclusiveness and ultimately the protection of the interests of the minority groups like the Ijaw nation. Rather than gravitate into a new party that has an uncertain direction, I strongly believe our remit is to stay, reform and rebuild the PDP into the party it should be. Bayelsa going into the hand of the opposition at this stage is too big a gamble for Bayelsans and is not a chance they should take.

Looking at the power of incumbency, some political commentators believe the table can still turn in Bayelsa State. What is your reaction to this?

I don’t pay much attention to political commentators as it is often difficult to differentiate what is objective commentary from what is agenda, but what I believe is that my party is poised for electoral victory as we have very strong connection to the grassroots and a history of winning.

Do you think Seriake Dickson has done well?

I like to align myself with a school of thought that says posterity is often the best judge of the tenure of political office holders. Obviously, coming from a person loyal to the party like me, my judgement will always be biased in the affirmative, but the real judgment is what people will say of him 5, 10, 20 years from now. In Nigeria today, after all the politics of bitterness has subsided and the bias has passed, people still identify political leaders for their achievements and by their achievements only. Till tomorrow, Okilo is still reckoned with kindly and needs no one to sing his praises.

Can you give us an insight into why PDP settled for Diri?

The word “settled for” is a strange one. We had primaries. We were over 20 aspirants that contested and one individual had to emerge. At this point, we are focused on moving forward as a united family to ensure our party retains the state, despite on-going attempts at reconciling some of our aggrieved members.

There seems to be a coalition of forces against the PDP’s governorship candidate. How is your party responding to this?

The facts on the ground speak of alignments and counter alignments as is customary in our political clime during election seasons. I cannot speak of the emergence or the pendency of any grand coalition against the PDP that is something out of the ordinary.

Outside the establishment, how acceptable is the PDP candidate?

The PDP candidate, Senator Diri is a serving senator of the Federal Republic of Nigeria who has represented and still represents the interests of his senatorial district, his state and his region. His acceptability is a forgone conclusion as he is not unknown quantity.

Some analysts have described the battle in Bayelsa State as a straight fight between Timipre Sylva and Seriake Dickson. What do you think?

Timipre Sylva and Seriake Dickson are both stakeholders in the Bayelsa project and their interest and influence in the outcome of the elections cannot be overemphasized, but I think it is important to note that they had their own “straight fight” in 2015. This election if we are to call it a two horse race is actually between Douye Diri and David Lyon and we should accord them both and indeed all the other aspirants contesting the elections their due.

Some analysts have described the APC candidate as the most visible choice for the people of Bayelsa State. Don’t you see the electorate voting APC on Saturday?

PDP still remains the party to beat in Bayelsa. There is an emotional bond between the people and our party. The people know that their interests are best served and protected with the PDP.

Some key members of the PDP recently resigned and joined APC. Would this not affect the chance of the PDP on Saturday?

As I said earlier, this is the season for alignments and counter alignments, so none of this is a surprise or unexpected. What is important is to have a sound and strategic game plan heading into the election proper.

There are those who believe that the PDP and APC candidates do not have the political mettle and exposure to rule Bayelsa State. Do you have this fear?

I can only speak about our party’s candidate who has the singular privilege of being a serving senator of the Federal Republic of Nigeria. If he has the mettle to represent our state at the Federal level and by all accounts acquit expertly, I do not see how his mettle and exposure can be questioned. As for the APC candidate, Mr. Lyon, I am not too familiar with his background and qualifications, but I believe Bayelsans will know whom to choose and who has their best interests at heart, when the time comes.

Why are you endorsing Diri’s gubernatorial ambition?

Beyond the fact that as a loyal party man, I am duty bound to support our party’s candidate, I am convinced that the Distinguished Senator has the wherewithal to deliver good governance to the state and that Bayelsa is safer with the Peoples Democratic Party.

What are the plans of the PDP for the people of Bayelsa State?

In a nutshell, Inclusive economic growth, a strong focus on modern education for our children, meaningful infrastructural development that properly integrates our state from end to end, qualitative, consistent and accessible healthcare and expansion in private sector led industry that takes our youth of the streets.

The Bayelsa governorship race is a challenge to the South-South PDP. Should PDP be defeated, what should the party do?

I am not envisaging anything outside of a victory on November 16, but I think it is important that all actors in the political space to begin to learn to imbibe a sense of good sportsmanship in our electoral contests. I think a spirit such as this will reduce potential flashpoints which sadly are a hallmark of elections in our state and region.

There has been widespread speculation that Mrs. Patience Jonathan plans to support the APC candidate. Are you not worried about this development?

I am not aware of such endorsement by Mrs. Jonathan.

Some Bayelsa PDP members are in court. What is the situation now? Has the party made any concession?

The party has set up various committees to reconcile aggrieved members and I believe those committees have been working assiduously to reach a compromise between all the aggrieved parties and indeed concessions and consensus have been reached.

What is the PDP government doing to handle youth restiveness and insecurity in Bayelsa State?

Insecurity is not just a Bayelsa problem. It is a nationwide phenomenon that requires tough solutions from the actors who control the macroeconomic levers of the country. Sadly, the PDP is no longer at the helm and as such those who currently control affairs of state are better placed to effect the difficult choices that need to be made.

What is your message to the people of Bayelsa State?

My message to the people of Bayelsa is to stick with the PDP and reform it rather than take a chance on a party that hasn’t been able to impact positively on the fortunes of Nigeria since it came into office in 2015 despite many of its outlandish promises. I enjoin my fellow Bayelsans to come out massively on the 16th of November and vote overwhelmingly for our party and its candidate senator Douye Diri.