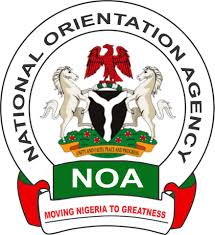 As the country prepares for governorship polls this Saturday, the National Orientation Agency (NOA) in conjunction with Mafoluku Youth Alliance (MYA), a community based organization, have sensitized Nigerians on the need for violent free polls.

The sensitization seminar which was held at Idera Market in Mafoluku  Oshodi Lagos was meant to educate the citizens on the importance of peaceful elections in the coming governorship and House of Assemblies elections.

Speaking at the programme, NOA’s Deputy Director Mrs Jumoke Oduola, blamed election violence on politicians who are head bent to stick to power and not willing  to follow the rule of law and also citizens who allowed themselves to be used as political thugs.

“The cause of election violence is when politicians fail to follow the rule of law guiding the conducting of elections and when the individual voters fail to do the needful during elections. If the rules are followed there will be peace and if the electoral body is not partial there will be free fair and violent free election,” she said.

The NOA officer urged citizens to troop out in their numbers in the coming elections to vote candidates of their choice as she decried low turnout in the last presidential and national assembly elections which was held on 23 February.

“Voter apathy could be based on assumption of the outcome of election result, this is not good, you cannot assume that the election result will be like this or that and you refuse to participate in it suppose it does not go that way, mind you his or her vote might change the whole process for good. More so, his or her staying back from voting is an act of lack of patriotism by his not doing his civic duty as a Nigeria you are obligated to exercise your civic responsibility.

According to INEC records we have over 7 million registered voters in Lagos but it was surprising seeing that less than 2 million Lagosians actually voted in the last election, this is worrisome and we all need to change this attitude by coming out this coming election en masse to vote candidate of our choice, it is only in doing that we can be good citizens of this country,” she said.

In his address to the marketers on the occasion, Founder of MYA, Mr Muiz Akinbola, said the group staged the sensitization seminar for marketers in the community to enlighten them on the need for violent free elections and why they need to take active role in the election process.

“We have set out today to enlighten the marketers and the public in general on the essence of violent free elections in the country and to also encourage them to take active role in the politics of the country. There is no alternative to violent free election in Nigeria because this is what will give us ability to coexist peacefully,” he said.