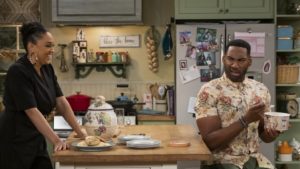 News Agency of Nigeria (NAN) reports that ‘Family Reunion’ follows the McKellans, a family that decides to leave their glamorous city life and move back to their hometown.

Alabi was born to a Nigerian father and Puerto Rican mother, Alabi and was drawn to acting at a young age, but he was forced to choose between that and football.

He soon retired from football and started acting full-time. He has appeared in shows like ‘Bosch’, ‘Modern Family’, ‘Insecure’ and ‘Raven’s Home’.

NAN reports that his role in ‘Family Reunion’ is his first leading role with which he is fast becoming a fan favourite.

On ‘Family Reunion’, Alabi plays Moz McKellan, a retired pro-football player who moves his family from their bustling Seattle city life to live with their hilarious and endearing Southern family in Columbus, Georgia.

Speaking about the show in an interview, Alabi said, “I think what viewers will get first and foremost is a sense of nostalgia.

“I think you’ll get a throwback to shows like Family Matters and Fresh Prince of Bel-Air.

“I think we really wanted to make sure that viewers felt that family dynamic, that sitcom feel, and after that, you’re going to laugh a lot.” (NAN)