Rose Moses on the Xpress

We, the people of Nigeria can best be described as the most persevering set of humans on earth. It would appear Nigerians have gotten so used to hard times that at all times most of them would see reason to justify all manner of painful and exploitative situations, even when they are made to pay for them.

From all indications, Nigerians are exploited left, right and centre, especially by those they put in positions of authority to protect them. And so, Nigerians are about the very few people, if any other at all, on planet earth that pay for services not rendered. Taxes, for instance, are deducted at source from most workers. Some retirees are left to die in queues while waiting for their pensions, money they contributed for retirement while still in active service!

Yet, most Nigerians seem to be fine with the situation, even when they do not see what the taxes they pay are used for. As I write, it is rumoured that the Nigerian National Petroleum Corporation (NNPC) is again hinting of increase in pump prices of petroleum products, even when there is hardly anything to show for the almost 100 per cent increase undertaken by the All Progressives Congress (APC)-led government shortly after assumption of office in 2015.

And since such rumours in Nigeria usually turn out to be true, a new and biting price regime may soon be forced down the throats of consumers, which like previous ones, may not likely bring about any improvement in their lives. Instead, the living standard will get worst. And in the words of famous Afrobeat maestro, late Fela Anikulakpo Kuti, they will just go on suffering and smiling with a good number of them even worshipping those stealing and looting their commonwealth.

So, despite all the taxes and charges they are made to pay, the average Nigerian will in addition have to pump his/her own water by digging a borehole. And as deadly as they can be, generators are now part of every home in the country as the people are left with no option than to supply their own electricity, most of the time. These generators and the sickening noise from them have actually forced most Nigerians to become noise makers. They now shout on top of their voices while holding conversations, simply because that is about the only way they can hear each other while the generating set is on.

The unpleasant attitude over a long period of time, unfortunately, has subconsciously become a way of life for some, even when the generators are not on. Add this to the fact that many have lost their lives to the poisonous fumes emitted by the generators and you will understand better what Nigerians go through daily.

One of the major problems that most Nigerians have endured for as long as one can remember is not just the poor supply but also the fact that consumers are oftentimes made to pay for electricity that were not supplied via the fraudulent estimated billing system. Simply put, Nigerians pay for darkness.

Daily, numerous aggrieved consumers lament excessive bills that the electricity distribution companies generate for them by imagination and arbitrary estimation, whether or not power was supplied or consumed. The only programme that will solve the problem, pre-paid metering system, is one thing officials have not seem to want to work because it will put a stop to their swindling of consumers.

Gradual but grudgingly, however, it appears something is being done about the pre-paid metering system in Lagos and perhaps, other parts of the country at the moment. But we wait to see how sincere they are because public service in Nigeria has long lost any form of credibility.

That is also why in most communities and neighborhoods, citizens are saddled with the responsibilities of fixing the roads, if they must have motorable ones, their taxes and other charges notwithstanding.

That is why too the Lagos State government, without any form of guilt, would recently role out, or rather, recycle what is said to be existing traffic rules in the state, considering the pitiable states of Lagos roads at the time the issue came up. To say that these roads are death traps is to say the least and threatening to fine users up to N50, 000 and above, or confiscating their vehicles for traffic offences on them could be morally unjust. 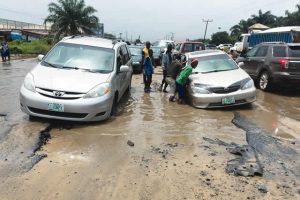 And this is not saying that traffic offenders or reckless drivers should not be punished. What I am saying, instead, is that a government that would be imposing such fines and penalties must fulfill its part of the bargain, which is to make these roads motorable.

Among the long list of sanctions and fines, which the new government of Mr. Babajide Sanwo-Olu threw out to the public in Lagos without considering the pains road users are subjected to include impounding of vehicles believed to be causing obstruction, broken down vehicles, or those driven without a valid road worthiness certificates.

How does it feel, for instance, to be asked for road worthiness certificate of your car on roads that are hardly motorable, or vehicle worthy? I am talking about roads that shorten the life span of your car by over 50 per cent! But Nigerians are mostly lethargic, have freely accepted their tag of suffering and smiling, they hardly make demands or call the governments to account for monies budgeted for repairs of infrastructure.

Instead, they watch and join some rogue politicians in some jamborees and happily accept peanuts to help send them back to office. And that completes that circle because they will never see, hear from or feel the impact of these politicians that should serve their interest for the next four years when they come back to them again in the name of election.

So, the trauma continues. On Lagos roads, especially these days of constant heavy rain falls, with deep potholes submerged in pools of water, it is one hell of a nightmare. Sometimes you run into these gullies, so to speak, on major roads, pick nails and metals that end up puncturing your tyres. And the bill is on you, even when government has collected road worthiness money from you.

From Ikorodu to Ojuelegba, from Oshodi to Apapa, Lagos Island to Lagos Mainland, the roads are in a state of near collapse. It is often a harrowing experience navigating through them, at the end of which they render one useless, more so, if it is to work. End result is that there will be a drop in productivity. And yet we wonder why we are not making progress!

READ ALSO:What men do that piss women off

For these reasons, the Lagos State laws against traffic offenders are not just punitive but too draconian. It is a misplaced priority because what is expected of Governor Sanwo-Olu is to first ensure that the basic welfare of the people in terms of transportation is well taken care of. The road network must satisfy the needs of the people.

And we must acknowledge that the rains do not fall in Nigeria, alone. What happens is that the rains expose the shoddiness, nay, the wickedness of Nigerian contractors and their partners in government that steal the budget for maintenance of these roads, thus leaving us with cheap and poorly maintained ones, some of which even disappear before the rains eventually come to wash away whatever is left of them.

Although the new Lagos state governor had boasted of clearing the Apapa gridlock (the biggest monster in any traffic crises, anywhere in the world, perhaps) in his first 60 days in office and would later retract that statement, if clearing gridlock is priority to this administration, the first thing would be to repair the bad roads and fill the potholes, which are mostly responsible for slowing down of traffic.

Just some weeks back, some road users were exposed to a deadly show of power and wealth when a helicopter had to land in the middle of a major highway, where hundreds of cars were trapped in traffic, to pick a privileged victim of that gridlock out of that hell. Some reasons have been given for that incident and no one appears to have addressed the danger it posed to thousands of people on the same road at the time. This gives the impression that such dangerous and reckless display is allowed and may soon become a norm in what is gradually gaining ground as a lawless society.

But back to where we were, and in conclusion, really, the traffic laws in Lagos, for now, will continue to attract condemnation, and actually seem like killing an ant with a sledge hammer, unless the biting gridlock is addressed, which starts with fixing the roads and ensuring that the traffic lights are functioning among others.

The tendency, even for a highly disciplined person trapped in one spot for hours to look for alternative route, even if it means driving one-way, is high.

And hey, who wants to pay for road worthiness on a car that is constantly sent to the mechanic by same collapsed roads that are not car worthy, anyway? That can only happen in Nigeria, where it is suffering and smiling all the way!