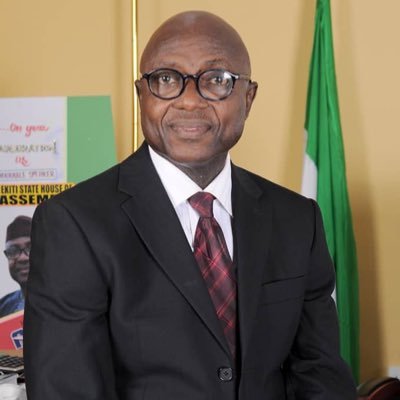 Speaker of the Ekiti State House of Assembly, Hon. Funminiyi Afuye, has urged Nigerians to mount pressure on the National Assembly to rework the constitution to allow for the reintroduction of History in the country’s educational curriculum.

Hon. Afuye said the military government of Gen. Ibrahim Babangida that expunged History from the curriculum did that out of ignorance and with the assumption that the men in khaki would continually dominate the country’s politics.

The Speaker spoke, on Wednesday, at the state secretariat, in Ado-Ekiti, during a stakeholders’ meeting on Ekiti Parapo Festival billed to hold on October 2-5 at Okemesi-Ekiti .

According to him, “The expunction of History shows that the struggle for the restructuring of Nigeria continues, because each state should be able to legislate on its own educational policy. History is very important in the life of any nation.

“Unfortunately, our curriculum did not allow History. Even if we don’t study European history, let us know that of our own.

“History must be brought back. We did not create ourselves and it is right for us to know our links and Nigerians must tell the National Assembly as representatives of the people to rework the constitution to bring it back”.

The Speaker described Okemesi town as the link between Yoruba nation and Ekiti, saying the Ekiti Parapo war fought in the town between Ibadan and Ekiti warriors was the longest civil war in history.

“This war was prosecuted at the instance of Okemesi Warlord, Fabunmi and the leader of Ijesha Warriors, Ogedengbe. If we don’t remember our past, we will just be moving rudderlessly and our existence will be threatened.”

Director General of Ekiti State Council of Art and Culture, Mr. Wale Ojo-Lanre, said Governor  Fayemi is committed to revamping the Arts and Culture through supports for towns’ festivals.

In his words, “Okemesi represents a town where Ekiti’s unity, freedom and patriotism began with Ekiti Parapo War. The peace treaty of 1886 was instructive that we must remember our dead heroes”.

The Chairman, Okemesi Cultural Heritage and Tourism Committee, Prince Kayode Oni, said the festival is a memorial package of events to honour what the Ijesha and Ekiti warlords, led by Fabunmi and Ogedengbe did at the Ekiti Parapo War of freedom.

“If we have not joined forces, the Ekiti nation would have become nonexistent. hence, the need to celebrate and promote unity, courage, and patriotism and also to plant those virtues and make them undying traditions with a view to evolving a society of courageous and selfless people”.

To be honoured at the event are: The Speaker, Ekiti House of Assembly, Hon Funminiyi Afuye, Chief Afe Babalola (SAN) the late governor of the old Western region, Major Gen Adeyinka Adebayo, his predecessor, the late Lt. Col. Adekunle Fajuyi, Director General, National Council of Arts and Culture, Mr. Segun Runsewe, among others.