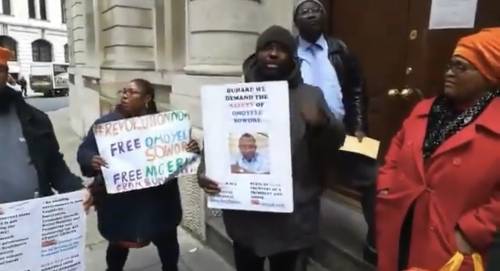 Officials and workers in the Nigerian High Commission in London, United Kingdom, had a busy day, on Wednesday, when a group of Nigerians staged a peaceful demonstration in front of the High Commission.

The group said it frowned at the state of governance in Nigeria under President Muhammadu Buhari.

The protesters also said Nigerians had lost hope of a meaningful future under the current administration.

They went on to condemn the government for what it called ‘baseless charges’ against rights activist and journalist, Omoyele Sowore, asking for the case to be immediately dropped.

According to the group, “It is fraudulent charges. They are not allowing Sowore to go and see his family. For several months now, Sowore has not set eyes on his family.

“The case has again been postponed until April 1 and 2. Can you all see the charade behind this.

“We are calling on the government to drop all charges against Sowore, Olawale Bakare (Mandate), Agba Jalingo.

“The government has no solid evidence to pursue the cases against Sowore and others and instead of them to humbly drop them, they are wasting everybody’s time.

“If indeed they had evidence, they won’t be seeking for adjournment, they will proceed with the case.

There are a lot of people detained unjustly across Nigeria that we don’t know about. Nigeria today has become a lawless society and President Muhammadu Buhari is a disaster.

“Nigeria has failed for everybody. There are killings everyday across the country. Nothing is working anymore.

“But government keeps deceiving everybody and that is why we have embarked on this protest to let the world know what is actually going on in Nigeria.

“We cannot prosper as a country when there is widespread injustice everywhere.

“The same DSS officials that has failed to apprehend Boko Haram members are the ones chasing after and tormenting innocent citizens. This cannot continue.

“We are calling for a referendum so that people can express their thoughts about this contraption called Nigeria.

“This country is no longer working, we need to go our separate ways.”

Cristiano Ronaldo in quarantine in Portugal over Coronavirus

Confusion over ex-Emir Sanusi’s whereabouts, may have arrived in Lagos