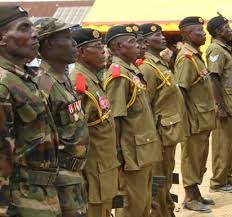 The News Agency of Nigeria (NAN) reports that the highest donations of N3 million and N2 million each were received from the Sokoto State Government and the Chief Launcher, Alhaji Sahabi Bodinga, respectively.

Similarly, the security agencies in the state made a combined donation of N500, 000, through the State Commissioner of Police, Mr Murtala Mani.

Gov. Aminu Tambuwal urged individuals and organisations to support the welfare of families of fallen heroes and ex-servicemen.

Represented by the Secretary to the State Government, Prof. Bashir Garba, the governor said the donation was to support families of fallen heroes who sacrificed their lives defending the nation.

“Government is concerned and interested in the survival, standard of living and quality of lives of membership of the legion.

“We will continue to support members and families of our heroes who gave their lives endlessly to fight for peace of our dear nation,’’ Tambuwal said.

He also announced a donation of N30,000 from each of the 24 State Executive Council members, N20,000 each from his Special Advisers and Assistants.

Earlier, Alhaji Aliyu Danchadi, the Chairman of the state Council of Nigerian Legion, said that the Armed Forces Remembrance was set aside to pay tribute to the heroes who paid the ultimate price of death to fight for unity and stability of the country.

Danchadi commended the state government and individuals for their support to the families of war veterans and appealed for more assistance towards improving the welfare of members of the legion.

He said that such donations would help in providing succour to ex-servicemen and dependants of the fallen heroes. (NAN)

Security beefed up ahead of Osinbajo’s visit to Oyo