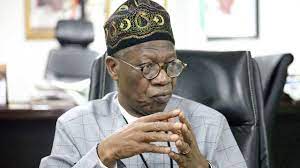 Minister of Information and Culture, Alhaji Lai Mohammed has said that the Federal Government would not be stampeded by the terror advisories released by the governments of the United States of America and the United Kingdom.

ALhaji Mohammed said that Nigeria would not be stampeded by whatever any government decides to tell its people living in Abuja and parts of the country.

The Minister said this, on Wednesday,  during a briefing after the Federal Executive Council meeting chaired by the Vice President Yemi Osinbajo.

The Minister also declared that the US acted within her rights to advise her citizens to go home but Nigeria won’t be stampeded by such warning or action.

He underscored that the government has in the last few months taken a firm handle of security, urging citizens to avoid liking or sharing materials that could incite panic.

Recall that the US and Britain had, last Sunday, warned of possible terror attacks in Abuja, especially at government buildings, places of worship, schools and other centres where large crowds gather.

The US further urged its citizens and Embassy staff in Nigeria’s political capital to leave but the Department of States Services urged residents of Abuja and Nigerians in general to remain calm, saying security agencies are right on top of the situation.