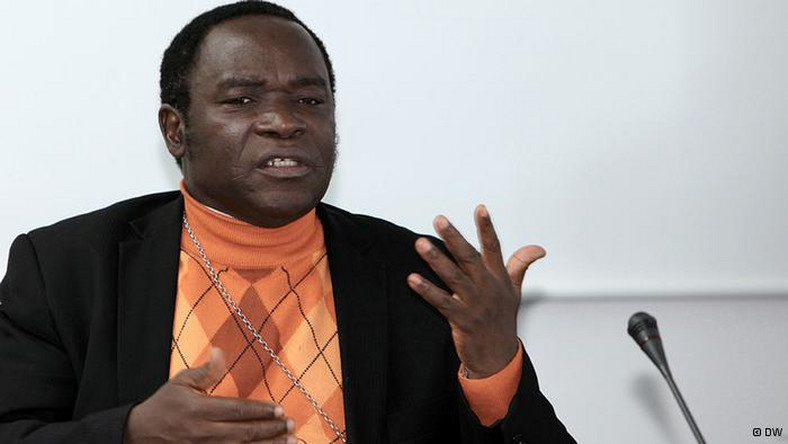 He also accused the President of reneging on his promise to be even-handed and to end insecurity in the country.

The cleric alleged that the government is favouring Muslims and indulging in “divisive policies that would put our country to the brink”.

Rev. Kukah, who has been a fierce critic of the Buhari administration, made the remarks in his homily during the funeral for slain Seminarian Michael Nnadi.

He said with the killing of Seminarian Nnadi after those of several priests, it is safe to say that Christians in the North are marked men and women today. “Yet, we must be ready to be washed in the blood of the Lamb.”

Bishop Kukah lamented that “Nigeria’s years of hypocrisy, duplicity, fabricated integrity, false piety, empty morality, fraud and Pharisaism” have caught up with Nigerians, adding that, the country is at the crossroads, with its future hanging precariously in balance.

Rev. Kukah who recalled their painful moment of negotiation with the kidnappers of the four young seminarians and the killing of Nnadi, noted that Christians in the north had for long become targets of killings by terrorists under the garb of Islam.

The Bishop while apparently reacting to the recent statement credited to President Buhari that, 90 per cent of Boko Haram victims were Mislims, queried: “If your son steals from me, do you solve the problem by saying he also steals from you”?

According to him, “The persecution of Christians in northern Nigeria is as old as the modern Nigerian state. We are being told that this situation has nothing to do with religion. Really? It is what happens when politicians use religion to extend the frontiers of their ambition and power.

“Are we to believe that simply because Boko Haram kills Muslims too, they wear no religious garb? Are we to deny the evidence before us, of kidnappers separating Muslims from infidels or compelling Christians to convert or die?

“Their (Chsristians) experiences and fears of northern, Islamic domination are documented in the Willink Commission Report way back in 1956.

“It was also the reason they formed a political platform called, the Non-Muslim League.

“All of us must confess in all honesty that in the years that have passed, the northern Muslim elite has not developed a moral basis for adequate power sharing with their Christian co-regionalists.

“Our nation is like a ship stranded on the high seas, rudderless and with broken navigational aids. Today, our years of hypocrisy, duplicity, fabricated integrity, false piety, empty morality, fraud and Pharisaism have caught up with us. Nigeria is on the crossroads and its future hangs precariously in a balance.

“This is a wake-up call for us. As St. Paul reminds us; The night is far spent, and the day is at hand. Therefore, let us cast away the works of darkness and put on the armour of light (Romans 13:12).

It is time to confront and dispel the clouds of evil that hover over us.

“Nigeria is at a point where we must call for a verdict. There must be something that a man, nay, a nation should be ready to die for.

“Sadly, or even tragically, today, Nigeria, does not possess that set of goals or values for which any sane citizen is prepared to die for her.

“Perhaps, I should correct myself and say that the average office holder is ready to die to protect his office but not for the nation that has given him or her that office.

“The Yoruba say that ‘if it takes you 25 years to practice madness, how much time would you have to put it into real life?’ We have practiced madness for too long. Our attempt to build a nation has become like the agony of Sisyphus who angered the gods and had to endure the frustration of rolling a stone up the mountain. Each time he got near the top, the gods would tip the stone back and he would go back to start all over again.

“What has befallen our nation? Nigeria needs to pause for a moment and think. No one more than the President of Nigeria, Major General Muhammadu Buhari who was voted for in 2015 on the grounds of his own promises to rout Boko Haram and place the country on an even keel.

“In an address at the prestigious Policy Think Tank, Chatham House in London, just before the elections, Major General Buhari told his audience: ‘I, as a retired General and a former Head of State, have always known about our soldiers.

“They are capable and they are well-trained, patriotic, brave and always ready to do their duty. If I’m elected President, the world will have no reason to worry about Nigeria.

“Nigeria will return to its stabilising role in West Africa. We will pay sufficient attention to the welfare of our soldiers in and out of service. We will develop adequate and modern arms and ammunition. We will improve intelligence gathering and border patrols to choke Boko Haram’s financial and equipment channels.

“We will be tough on terrorism and tough on its root  causes by initiating a comprehensive economic development and promoting infrastructural development…we will always act on time and not allow problems to irresponsibly fester. And I, Muhammadu Buhari, will always lead from the front.”

“There is no need to make any further comments on this claim.

“No one in that hall or anywhere in Nigeria doubted the President who ran his campaign on a tank supposedly full of the fuel of integrity and moral probity. No one could have imagined that in winning the Presidency, General Buhari would operate on “divisive policies that would push our country to the brink”.

“Today, in Nigeria, the noble religion of Islam has convulsed. It has become associated with some of worst fears among our people.

“Muslim scholars, traditional rulers and intellectuals have continued to cry out helplessly, asking for their religion and region to be freed from this chokehold. This is because, in all of this, neither Islam nor the North can identify any real benefits from these years that have been consumed by the locusts that this government has unleashed on our country.

The remains of Seminarian Michael Nnadi was however laid to rest around 1:30p.m, on Tuesday, at the premises of Good Shepherd Seminary, amidst tears and anguish. (TheNation)