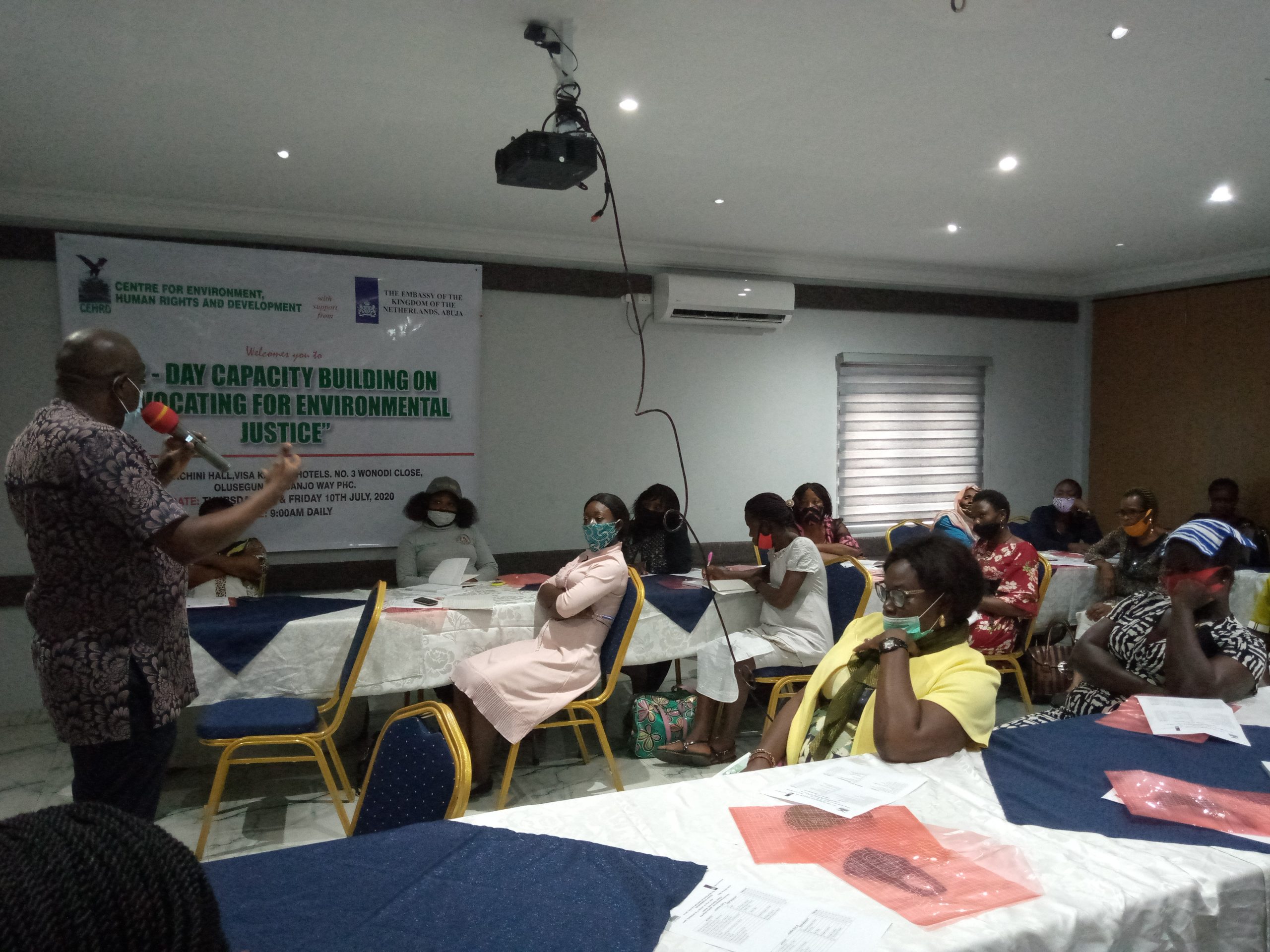 A nongovernmental organisation, Centre for Environment, Human Rights and Development, CEHRD, at the weekend charged Niger Delta women to advocate for environmental justice in their area.

CEHRD is supported by the Embassy of the Netherlands in Nigeria

The women under the aegis of Women for Environmental Justice Network, selected across communities in some local government areas of Rivers State,  including Ikwerre, Khana, Degema, Ogba/Egbema/Ndoni, Etche, Eleme, Tai, Asar-Toru, Gokana and Ahoada West, were trained at the weekend on environmental justice.

In his opening speech, Prof. Nenibarini Zabbey, Coordinator of the group noted that the network was set up by CEHRD in 2015 to enable Rivers and Bayelsa women to be part of the struggle for environmental justice.

He stressed that women and children were most affected by the pollution, hence the need to include the women in the discourse on how to bring to an end the environmental hazard.

He said: “We formed the Women for Environmental Justice Network in Rivers and Bayelsa states in 2015. The reason we supported the women in that network is to galvanise their capacity to speak on the environment where they live and get their livelihood.

“We have undertaken several years of research and we came to the conclusion that if the environment of the Niger Delta will be adequately conserved, there is need for those who are most impacted to lead that struggle and those who are domiciled in the community, because when there is environmental pollution those who have the means of migrating will go away but the women will always be there because their livelihood is in the environment.

Zabbey, who is also a Professor of Hydrobiology (Biomonitoring and Restoration Ecology) with the University of Port Harcourt, also stated that apart from  training  the women, the organisation also intends to embark on capacity building for some of the youths in the affected communities.

“The workshop we are having today is part of our sustainable capacity support of the network.

“What we are doing is to conduct refresher training for the old members and then introduce new members that we have identified, as those who are passionate for environmental protection in their locality.

“We trained them on how to identify environmental problems in their localities and how to advocate against those problems.

“The problems will be prevented when we have the right policies in place; people need to demand for that right policies and that is why we are doing this workshop.

Also, Dr. Kabari Sam, Head, Environment and Conservation at CEHRD, who was the trainer at the programme, noted that women were formidable forces that can influence justice in the society.

“Today’s training is for women and because CEHRD has recognised the position of women in the society. Women are the formidable and powerful force that we can ride on to derive and achieve effective and sustainable environmental management.

“Today’s training focus on environmental justice, and that is talking about how they can ensure that policies and distributions of facilities that contributes to environmental problems are evenly distributed to all the impacted areas in the Niger Delta region.”

Some of the participants that spoke with The Nigerian Xpress  commended the group for the opportunity to have equipped to be among those that can influence policies that will save their environment from getting completely destroyed by pollution.

COVID-19: What firms must do to survive pandemic – Conteh, business expert