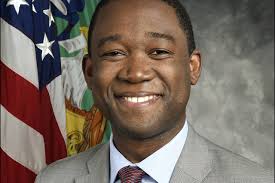 Share
Mrs. Abike Dabiri-Erewa, Chairman/CEO of Nigerians in Diaspora Commission (NIDCOM) has described the appointment of Nigeria-born Mr. Adeyemo Adewale as President of the Obama Foundation in the U.S. as a well-deserved landmark appointment.In the letter of congratulations signed by Dabiri-Erewa and addressed to Mr. Adeyemo Adewale, she said it was gratifying that the U.S.-based Nigerian was qualified enough to be the President of the Obama Foundation.She said that the appointment had confirmed that “we have many wonderful Nigerians portraying the good image of the country in their chosen fields

“Your track record of experience is of high repute, which has demonstrated that millions of Nigerians in the Diaspora are excelling in their various professions and continue to project a good image of the country.”

READ ALSO:APC will take Bayelsa if we’re not united- Jonathan to PDP

Adeyemo, an economic expert, was on Tuesday announced as the first president of the Obama Foundation.

He is expected to work closely with the current leadership of the Foundation, including the Board’s Chairman, Martin Nesbitt and the CEO, David Simas.

He will manage the Foundation’s day-to-day operations, helping to implement the organisation’s overall strategic goals and vision.

Adeyemo was appointed the deputy National Security Adviser (NSA) for international economics by the Obama administration in December  2015.

He graduated from the University of California, Berkeley, with a bachelor’s of arts, before moving to Yale Law School, where he bagged his Juris Doctor (JD) for further studies in specialised law.

While at Yale, he was the co-director, project on law and education for the university.

Before his appointment, Adeyemo was the deputy chief of staff at the department of the treasury, a position he held for three years. He has served in various positions at treasury, including senior advisor to the chief of staff and deputy executive secretary.

Adeyemo also worked as the chief of staff at the Consumer Financial Protection Bureau from 2010 to 2011.

He was an editor for the Hamilton Project at the Brookings Institution from 2008 to 2009.

If Sowore is charged, Buhari will be my first witness in court – Falana