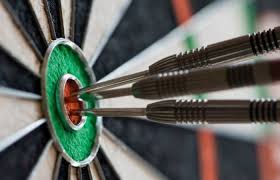 The week-long National Open Darts Championship kicked off on Thursday in Umuahia, the Abia State capital, with 10 states participating.
Declaring the competition open, Governor Okezie Ikpeazu, expressed the hope that the event would be used for talent hunt and harnessing the talents of budding darters in the country.
“I hope that the competition will help to discover new talents and also harness budding talents that would represent Abia in local and international darts competition,” he said.
The governor, who was represented by the Commissioner for Sports, Dr. Martins Okoji, said that bringing the competition to Abia was part of the state government’s measures to contribute to the development of the game in Nigeria.
Also, the President of Darts Federation of Nigeria, Haruna Abubakar, thanked the governor for agreeing to host the game and providing “the enabling environment for the championship to take place.”
Abubakar, who was represented at the event by his vice, Alabi Amuda, underscored the need for government to introduce the game in primary and secondary schools in the country.

READ ALSO: IMF’s Lagarde says China’s Belt, Road should only go where is is needed

He described dart as a “unique game”, saying, “Dart is life. There is nothing one can do without applying the principle of dart.”
He said that the game would help students to develop their mental capacity and also do well in mathematics and calculations.
The DFN president said that the federation was working through its zonal offices to woo state governors to key into its programme to develop the game by sponsoring the competition.
He said that the present leadership had made giant strides in trying to popularise the game in Nigeria since it was reconstituted in July 2015.
He said that aside from preparing a four-year workplan for the present executive, the leadership had the constitution of the federation reviewed and also featured youth game last year in Ilorin, among other achievements.
The Director of Sports in Abia, Isaac Isaac, expressed happiness that the game finally took off after some “minor administrative bottlenecks.”

Isaac said that the state had eight athletes with two technical officials taking part in the competition, adding, “our athletes are prepared and ready.”
“Among our athletes, we have some champions and I am sure they would emerge champions at the end of the competion because they would not want to lose their championship at home,” he said.
He thanked the governor for approving the memo for the state to host the championship, which he described as “milestone, being the first of its kind in the history of Abia.”
Speaking in an interview with the News Agency of Nigeria (NAN), some of the athletes, including Tolu Odedola (Ogun), Ayuba Randy (Kaduna) and Olumide Otumba (Ondo), urged Nigerians and governments at all levels to show greater interest in dart.
They said that the game would help to profitably engage the nation’s youths, describing it as an international game and a money spinner. (NAN)