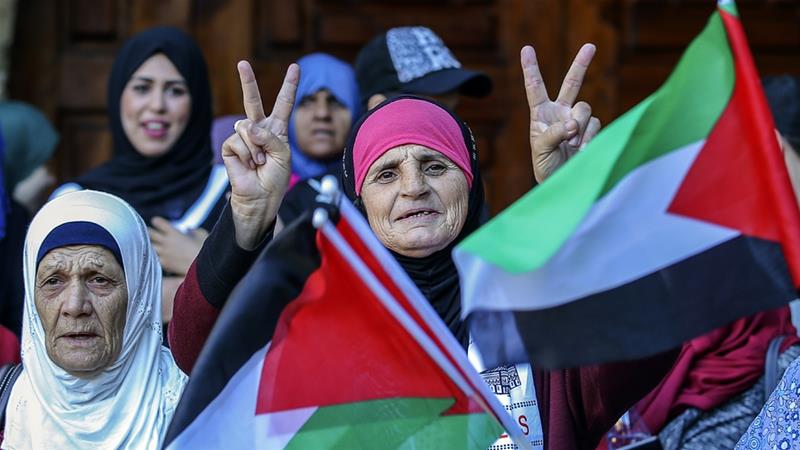 Palestinians are set to mark the 71st anniversary of Nakba Day with demonstrations and marches across the occupied West Bank and the Gaza Strip, putting Israel on edge amid Eurovision song contest festivities.

‘Nakba’, or catastrophe, commemorates the hundreds of thousands of Palestinians who were expelled in the war that led to the establishment of Israel in 1948.

Clashes broke out between hundreds of Palestinian demonstrators and Israeli soldiers along the border fence between eastern Gaza Strip and Israel on Wednesday.

Medics said three Palestinians were wounded during the clashes by Israeli soldiers. Witnesses said that Israeli soldiers showered the demonstrators with foul-smelling water and also fired tear gas canisters and rubber-coated steel bullets to disperse them and keep them away from the fence.

The Hamas-run al-Aqsa Radio station reported that thousands were expected to join the Nakba march in eastern Gaza, which is organised by the commission of the Great March of Return.

For over a year, Palestinians in Gaza have been holding weekly protests along the fence, calling for the right of return of Palestinian refugees and their descendants to the territory of today’s Israel, as well as for an end to the 12-year-long blockade imposed by Israel.

According to the Hamas-run Gaza Health Ministry, since the launch of the demonstrations, the Israeli army has shot and killed 305 Palestinian demonstrators, including 59 children and 10 women.

Residents in Gaza City on Wednesday also took part in a general strike to mark the day of mourning. A mass walkout was staged in the city, with shop-owners closing up their businesses.

On Tuesday, the eve of Nakba Day, dozens of left-wing activists protested against Israel’s treatment of Palestinians in Tel Aviv, where the first Eurovision semi-finals were being held.

“We are here to protest against the endless bloodshed in Gaza,” said one of the organisers, Noa Levy.

Ever since Israeli singer Netta Barzilai carried off last year’s prize with her spunky pop anthem “Toy,” earning Israel the right to host Eurovision, increasing numbers of cultural figures have pressured performers to pull out of the contest.

Dozens of European artists, led by former Pink Floyd frontman Roger Waters, signed a letter calling for the contest to be moved to another country.

Demonstrations have erupted outside television studios at a number of national finals.

Boycott activists stormed the stage during France’s semi-final round, fuelling fears of disruption at the main event.

Iceland’s performers have vowed to leverage their platform to show the “face of the occupation”.

Although the BDS movement, a Palestinian-led campaign advocating boycott, divestment and sanctions against Israel, failed to compel any of the 41 national broadcasters to quit the competition, the campaign has drawn international attention to topics that Israel had hoped to avoid.

Scores of demonstrations to mark the day of mourning and Eurovision protest are planned throughout the country on Wednesday.

In another protest coinciding with the Nakba commemoration, campaigners called on supporters of the Palestinian cause to at least temporarily deactivate their Airbnb accounts on Wednesday to protest against its listings in settlements in the occupied West Bank.

After Israeli pressure, the company last month reversed course and scrapped plans to ban homes in settlements from listing on the site.

The decision has led to fresh anger from groups opposed to the settlements, which are considered illegal under international law.

A range of organisations including Jewish Voice for Peace and the Palestine Institute for Public Diplomacy have backed a call for an at least temporary deactivation, with organisers saying thousands had pledged to do so.

“Ultimately we would like Airbnb to reverse its decision but we know that won’t be easy,” Salem Barahmeh, executive director of PIPD, told AFP news agency.

“But I think what we ultimately want to do is end this culture of impunity where international companies are allowed to be complicit in supporting war crimes and Israeli settlements that have been responsible for displacing Palestinians.”

Airbnb declined to comment, pointing instead to its statement from the April reversal.

That statement says that while the company will not ban the illegal settlement homes it will give all profits from those listings to charities.

Campaigners say this does not stop the settlers from making profits.

Around 400,000 Israelis live in settlements that dot the West Bank and range in size from tiny hamlets to large towns, in addition to 200,000 living in settlements in annexed east Jerusalem.

Settlements are built on land in Palestinian territories that Palestinians see as part of their future state. (Aljazeera)