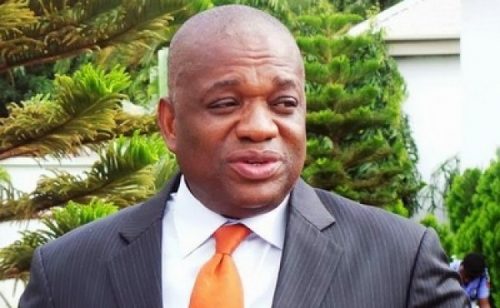 The Economic and Financial Crimes Commission (EFCC) prosecuted Kalu, his former Commissioner for Finance, Ude Udeogo, and a Company, Slok Nigeria Ltd., on the alleged offences.

The charges were however, subsequently amended, and the charges increased to 39 counts.

Kalu and others pleaded not guilty to the charges, and were granted bails.

News Agency of Nigeria (NAN) reports that Justice Idris who has been sitting as trial judge over the matter against Kalu, has been elevated to the Court of Appeal.

He, has however, been conducting trial in the case, following a fiat authorising him to continue.

Following accelerated hearing, Idris concluded trial of the case in August and adjourned the case for adoption of addresses.

In his address, Defence counsel, Chief Awa Kalu, SAN, urged the court to uphold his submissions as canvassed.

According to him, the prosecution had insinuated that the defendant knew that he could not face the “fire” of cross examination and so avoided same.

According to him, the defendant did not give any character evidence to warrant such assertion.

In response, the EFCC Counsel, Mr Rotimi Jacobs, SAN, refused to withdraw the said paragraphs, adding that the defendant had contended that he needed not give evidence but tendered statement.

According to Jacobs, the statement by the defendant was to effect that he did not receive up to N7 billion during his administration which sum he is being accused of and that he had provided some of the funds for running Abia State at the time.

Jacobs told the court that he had shown in his processes that during the period, Abia received up to N137 billion.

He, then repeated: “The first defendant knew we will cross examine him and that was why he refused to give evidence.

Justice Idris then said he would consider all issues raised in his judgment.

He adjourned the case until December 2 for Judgment.

Meanwhile, Idris thanked respective parties to the suit and informed parties that he had finally concluded all part heard matters for which he sat on fiat.

NAN recalls that on November 12, 2018 Kalu was absent for his trial, after being absent on a previous adjourned date of November 5, 2018.

Although, defence counsel had informed the court that he was away for medical treatment in Germany, the court had revoked his bail, and ordered that at the point of his entry into the country, he must submit relevant travelling document and self, to the EFCC, failing which he will be arrested.

In the charge, the defendants were alleged to have committed the offence between August 2001 and October 2005.

Kalu was alleged to have utilised his company to retain in the account of a First Inland bank, now FCMB, the sum of N200 million.

The sum is alleged to have formed part of funds illegally derived from the coffers of the Abia State Government.

In one of the counts, his company, Slok Nig. Ltd. and one Emeka Abone who is said to be at large, were also alleged to have retained in the company’s account the sum of N200 million, on behalf of the first accused.

In counts one to 10, the defendants were alleged to have retained about N2.5 billion in different accounts, which funds were said to belong to the Abia State Government.

Cumulatively, in all the counts, the defendants were alleged to have diverted over N7.2 billion from the Abia State government’s treasury, during Kalu’s tenure as governor.

It also contravenes the provisions of the Money Laundering Act of 1995 as amended by the amendment Act No.9 of 2002 and section 477 of the Criminal Code Act, Laws of the Federation, 1990. (NAN)