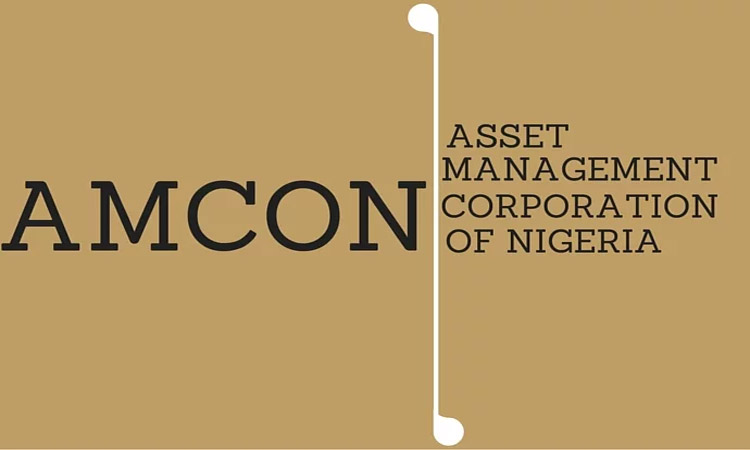 The Assets Management Corporation of Nigeria, AMCON seems battle-ready to recover the over N5 trillion “owed” it by some prominent Nigerians before the corporation winds down its operation in a few years. BABAJIDE OKEOWO in this report chronicles the issue bedeviling the corporation, its many court battles and the way forward.

A few days ago, the Assets Management Corporation of Nigeria, AMCON released a list of prominent Nigerians, who are allegedly indebted to the corporation to over N5trillion.
The names released by AMCON include those of Senator Ifeanyi Ubah, Publisher of Nigerian Mirror, Mr. Jimoh Ibrahim, prominent lawyer, Dr. Wale Babalakin, Senator Buruji Kashamu, former Governor of Enugu State, Chimaroke Nnamani, and one-time Minister of Power, Professor Barth Nnaji. Even a dead woman, Mrs. Josephine Damilola Kuteyi, made her way to the list.
To compel the “debtors” to pay up, the management of the Corporation paid the Vice President, Professor Yemi Osinbajo, a visit. At a meeting that took place at the Presidential Villa in Abuja, Muiz Banire, AMCON’s board chairman, lamented the refusal of the debtors to pay up their debts, saying that the top 20 debtors owe 67 per cent of the N5 trillion debts.
According to Banire, “We have been trying our best to recover this through the civil judicial process, but had encountered several challenges.”
The vice president in response said the time had come to ‘set some examples with some of the top debtors of AMCON,” to “serve as a deterrent to others.”
To match his talk with action, Osinbajo revealed that a special task force that will include the Economic and Financial Crimes Commission, EFCC; Nigerian Financial Intelligence Unit, NFIU; the Independent Corrupt Practices Commission, ICPC, and also the Permanent Secretaries of the Justice Ministry has been set up to re-strategise to achieve the desired results.

“The key is collaboration. We need a small team, comprising these agencies to look at the next steps that we need to take, especially the criminal aspect, forfeiture and all of that,” said Osinbajo.
Last week Wednesday, the Osinbajo proposal was given teeth, as President Muhammadu Buhari assented to a new Act that gave the Asset Management Corporation of Nigeria (AMCON) more power to enforce recovery of debt owed it by prominent Nigerians and corporate organisations.
The President reportedly signed the amendment of the AMCON law, alongside the National Biosafety Management Agency (Amendment) Act and Defence Intelligence Agency Civilian Pensions Board (Establishment) Act, 2019.
According to a statement credited to the presidential aide on National Assembly, Senator Ita Enang, the new law empowers the Corporation to place any bank account or any other account comparable to a bank account of a debtor of an eligible financial institution under surveillance.
The approval of the new law came weeks after a task force constituting all the anti graft agencies was set up by the Presidency, to fast track the effective recovery of the N5 trillion the corporation is battling with.
The details of the new law show that AMCON will obtain access to bank accounts, computer system component, electronic or mechanical device of any debtor with a view to establishing the location of funds belonging to the debtor.
Also, going by the new law, AMCON can now obtain information in respect of any private account together with all bank financial and commercial records of any debtor of any eligible financial institution, banking secrecy, and the protection of customer confidentiality is not a ground for the denial of the power of the Corporation under this section.

EFCC now in the mix

To show the seriousness of government’s intention, Acting Chairman of the Economic and Financial Crimes Commission (EFCC), Ibrahim Magu, last week vowed to assist AMCON to recover monies being owed by individuals and business entities in Nigeria. The acting spokesman of the EFCC, Tony Orilade in a statement credited to Magu on Wednesday said, “We are ready to work with you, and we will render assistance in terms of enforcement, in order to recover these loans, because they are affecting the economy of the country from flourishing.
“In order to recover these loans, there is the need for inter-agency collaboration, going beyond the EFCC to the police, the court, Central Bank of Nigeria, NDIC, because there is a need for AMCON to re-strategize and block loopholes.”
From the foregoing, AMCON is now empowered to blow hot on the debtors who are regarded as prominent Nigerians and big corporate organizations.
Already, AMCON has announced the takeover of two steel firms in Abuja and Calabar.

One of the major issues the corporation has faced is that of unending court cases and disputes over debts. The Corporation has more cases in court than the actual number of debts recovered. As at the last count and according to the official AMCON figure, the corporation is currently embroiled in more than 3,000 court cases with debtors.
According to Managing Director of AMCON, Ahmed Kuru, debtors prefer to resort to all manner of diversionary tactics, as opposed to dealing with the problem of their indebtedness.
Kuru said, “AMCON is supposed to be an intervention agency for only 10 years; so, people go to court deliberately to buy time, not that they know that they are right. To some of them, that gives them the window to come and talk to you and they continue to stretch it. We are a law-abiding corporation, so we have to follow the legal process.”

The last time The Nigerian Xpress spoke with Mr. Edward Akinlade, Group Managing Director of Suru Worldwide Ventures Nigeria Limited, the owner of Best Western Hotels, Allen, Ikeja, Lagos, he revealed that AMCON was running a one-man show and killing businesses and does not obey court orders despite claiming to follow court processes.
According to Akinlade, Best Western got a court judgment on the 22nd of April, 2018 that AMCON should return our hotel and that we are not owing AMCON any money; till date AMCON has not obeyed that court order, rather, they went on appeal the judgment.
“If you want to take over someone else’s property, you have to sue the person and go through the legal process, but in this case, AMCON cannot sue us because we already have a case against them still waiting for judgment, before the judgment was given, they have already gone ahead to take over our property and immediately we got the judgment in our favour, they rushed to court the same day to appeal the judgment.
Citing part of the judgment that affirmed the illegality of AMCON in taking over Best Western Hotel the ruling Akinlade said then: “This counterclaim is an abuse of court process, it seeks to renegotiate issues that have been dismissed. Having dismissed the claim necessitating into the counter-claim for an interlocutory injunction based on the counter-claim and if the counterclaim has been dismissed, it goes without saying that your application for an injunction is also dismissed as it is often said that you cannot put something on nothing.”

However, AMCON lost the appeal and has now headed to the Supreme Court on another appeal.
\Similarly, the Founder of Bi-Courtney, and Roygate Properties Limited, Wale Babalakin, one of those AMCON said is owing it has denied owing the Asset Management Corporation of Nigeria N49bn rather, it claims “the Federal Government of Nigeria, which owns AMCON that is indebted to Bi-Courtney to the sum of over N132bn.”
“AMCON has been ordered by a competent court of law to deduct any debt allegedly owed to AMCON by Dr. Babalakin, Bi-Courtney and Roygate from this sum.”
In a statement after the list was released, Babalakin said: “In 2012, AMCON had alleged that Roygate, Bi-Courtney, and Resort International Limited, a company owned by Babalakin, were indebted to AMCON to the sum of N9bn, N20bn, and N20bn, respectively. On the 5th day of April 2012, the Federal High Court in Suit No.: FHC/ABJ/CS/50/2009 – Bi-Courtney Limited v. Attorney General of the Federation, ordered that whatever debt that was then owed by Babalakin, Bi-Courtney, Roygate, and other associated companies to any agency of the Federal Government of Nigeria, be deducted from the sum of over N132bn, which the Federal Government owed Bi-Courtney.” He wondered why AMCON is yet to obey the court judgment.

Is AMCON really worth the effort?

AMCON was established on 19th July 2010 by the AMCON Act, it was designed to provide stability for the Nigerian financial system, by resolving the worsening cases of non-performing loans of banks. However, there have been worries in some quarters about the efficacy or otherwise of the corporation. According to statistics, since the commencement of operations of the corporation in 2010, it has only been able to recover about N1trillion from debtors. Out of the recovered amount, cash accounted for 60 per cent, while non-cash assets such as properties and equity securities accounted for the balance of 40 percent. Over the same period, AMCON’s repayment of its indebtedness to CBN was over N1trillion, while its total debt obligation to the CBN still currently stood in excess of N6 trillion.
Furthermore, AMCON is faced with serious difficulties in its attempts to sell recovered assets at competitive market price, owing chiefly to what Kuru attributed to ‘evaluation methodology, unperfected title documents, state of the economy, purchasing power.
“Proper valuation of properties that are traced to the obligor for recovery remains one of the identified challenges in the debt recovery process. Some of them are over-valued and when proper assessments are done the properties do not meet the said estimates, this slows the debt recovery process,” he lamented.

How AMCON can recover its debt – Nigerians

Stakeholders are, however, of the opinion that if AMCON is to recover this huge debt, the corporation must be given the requisite backing to deliver on its mandate.
According to Yakubu Mohammed, a renowned Journalist, “AMCON must be given the legal teeth to bite. For now, it does not have the power of arrest and prosecution. It is therefore at the mercy of other agencies like the Economic and Financial Crimes Commission, EFCC, the Independent Corrupt Practices, and Other Related Offences Commission, ICPC. But these agencies have their hands full, to say nothing about the snail speed with which justice is dispensed in the normal courts.”
On his part, Andy Kelly said whatever is being owed to AMCON by the so-called big men who are in the National Assembly should be deducted from their salaries as this will go a long way in reducing the debts.
“I know two of them who are in the Senate, Ifeanyi Ubah and Chimaroke Nnamani. It should be easier to get them to start repaying from their salary and monthly working allowances. It’ll go a long way in reducing their debts,’ he said.
Similarly, Ajayi Olusola, said AMCON should as a matter of urgency freeze accounts of debtor ‘big men’ and recover all the money owed.
“AMCON should as a matter of urgency freeze their accounts, seize their property and recover all the money owed,” he said.
Perhaps, AMCON’s last resort will work. Perhaps it will not work is left to be seen.