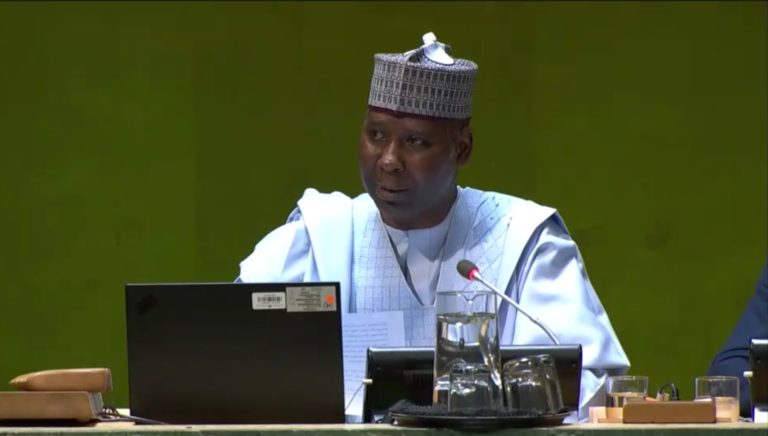 Nigeria’s Tijani Muhammad-Bande has assumed duty as President of the 74th session of the UN General Assembly which opened on Tuesday.

He performed his first official assignment by presiding over the session attended by UN Secretary General Antonio Guterres and the Under-Secretary-General for the General Assembly and Conference Management, Mr Movses Abelian.

In his opening address, the new PGA identified promotion of peace and security through conflict prevention as one of his areas of focus.

“I will collaborate and coordinate with the Security Council and the Secretariat to ensure that greater attention is paid to prevention rather than reaction to full- blown conflict.

“I will also advocate for effective early detection and warning systems as well as mediation, negotiation and peaceful settlement of ongoing conflicts.

“I will work to engender cooperation that addresses drivers of conflict such as poverty, exclusion and illiteracy,’’ he said.

Stating that it was time for action on the plans of the General Assembly, Muhammad-Bande solicited the continued support of members to actualise his vision.

In his remarks, Guterres lauded the priorities set by the PGA which he said were central to the Sustainable Development Goals.

The UN Chief noted that multi-stakeholder engagement would be essential in all those areas, urging stronger partnership between the GA and relevant organs of the UN.(NAN)

2023: Support APC now, you won’t get presidency in the bedroom, Ngige tells Igbo