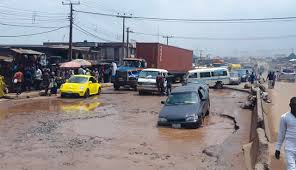 Some motorists operating within Sango-Ota area of Ogun state and its environs, on Friday urged the Federal Government to urgently repair the Lagos/Abeokuta Expressway, describing it as nightmare.

They expressed their concern in interviews with the News Agency of Nigeria (NAN) in Ota, Ogun.

The motorists alleged that a tanker loaded with petroleum products lost control as a result to break failure and killed a pedestrian, while another was injured on July 20, at the Joju Area, of the Lagos-Abeokuta Expressway.

They added that another accident that injured four persons also happened on the expressway when a truck overturned due to the bad road on Thursday at the Joju area.

According to them, the deplorable state of the road is inflicting serious pains on motorists plying the expressway.

Mr Temidayo Ogunrinde, said that the bad portions of the Lagos-Abeokuta Expressway had become death traps to users of the road, following the notable presence of potholes.

“We have also witnessed accidents that left injured victims and taken the lives of many people.

“The potholes make it easy for trucks and tankers to overturn and this often cause gridlocks,’’ he said.

Another road user, Mr Sule Mustapha, who is a commercial driver, stressed the need for the federal government to urgently repair the road, saying that they spend huge funds to repair their vehicles.

“The deplorable state of the road has caused users a lot of of discomfort, apart from reducing the life span of our vehicles,’’ he said.

Mustapha also said that their profits have drastically reduced because the bad road had reduced the number of trips they could make daily.

Mr Babatunde Ajayi, a resident of Sango-Ota, said that armed robbers were using the opportunity to rob innocent people at night, especially at bad portions of the road.

Ajayi explained that motorists plying the road spend hours in traffic, before getting to their destinations, adding that such stress was not good for their health.

He also said that this development caused some impatient drivers to driving against traffic, also leading to road mishaps.

Ajayi added that the bad state of the road had also affected business activities negatively in the area.

“We are therefore calling on the Federal Government to come to our aid by fixing the road, so that people can also enjoy the benefit of democracy.’’ he said. (NAN)