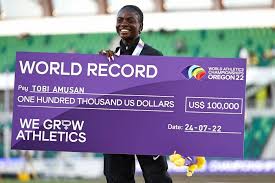 Nigeria’s Tobi Amusan and 100m hurdles Champion set the tracks on fire after she won the 100 meters race in the just concluded World Indoor Championships by dancing to the rave song, Buga by Nigerian musician, Kizz Daniel featuring Tekno.

The song which played in the stadium in Oregon, USA after she won the race saw her raising her shoulders to the signature style of the song which broke the internet.

In the video, Amusan was seen shaking hands with spectators, most of whom were whites who also tried to sing the song and dance alongside the new champion.

Meanwhile, the presidential candidate of the Labour Party, Peter Obi has congratulated Amusan who gold at the championship and said her tears while the Nigerian national anthem exemplifies the yearning of the Nigerian youths who wants a better country.

Obi said: “I sincerely congratulate Tobi Amusan on winning the 100M hurdles gold medal and setting a world record. Her tears at the ceremony podium while the Nigerian anthem played, connects that our dear country needs leaders to match the talents and ambitions of her youths.”

Nigerians have also been poking fun at commentators at the games who called Amusan Amazon, the e-commerce behemoth owned by Jeff Bezos.

The miscommunication of her name had thrown up Amazon to trend at top of the position on Twitter on Monday, July 25, 2022, packing over one million tweets.