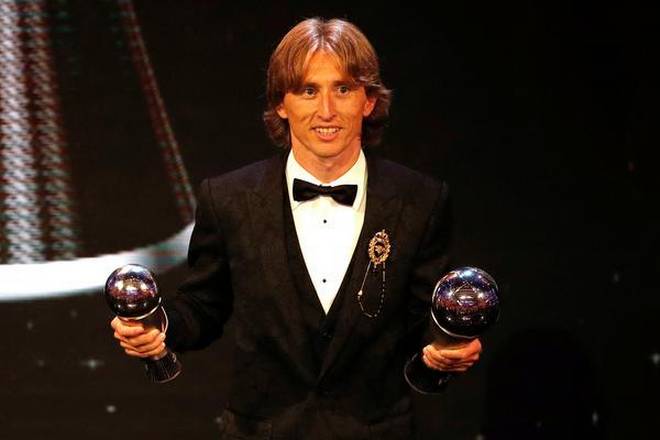 LONDON (AP) — Cristiano Ronaldo and Lionel Messi were far from the auditorium by the River Thames when Luka Modric broke their decade-long grip on FIFA’s award for the world’s best player.

Football’s biggest individual accolade was handed to the 33-year-old playmaker on Monday night in recognition of a year when he led Croatia to its first World Cup final and won a fourth Champions League title in five seasons with Real Madrid.

“It is very important, because for such a small country to win the best player award, it’s something amazing and that shows other small countries that everything is possible,” Modric said. “You just need to believe and to work for it. And that all dreams could come true.”

It required voters to be more imaginative and not just make the predictable picks of Ronaldo and Messi, who split the previous 10 awards. Messi voted for Modric, while Ronaldo and Modric each voted for Real Madrid’s Raphael Varane.

Brazil’s Marta did become a six-time winner, earning the women’s honor for the first time since 2010.

Another Brazilian, Kaka, had been the last player other than Messi or Ronaldo to claim the men’s prize from FIFA, at the 2007 gala.

“We knew we were surrounded by two aliens that were just sharing these awards,” Real Madrid and Spain defender Sergio Ramos said. “But I think it is also very positive to recognize the work, the career and the season of players that are not just strikers. I am really happy for Luka Modric”.

Modric has had to accept playing in Ronaldo’s shadow during six years at Madrid even as the 1.72 meters (5-foot-8) technically-gifted Croatian’s ingenuity on the ball and passing range made him as a key component in the team’s European dominance.

Modric and Ronaldo on a third successive Champions League in May before achieving something far more unexpected: captaining Croatia to its first World Cup final.

“I would change all my individual trophies for that trophy of World Cup champion,” Modric said, reflecting on the 4-2 loss to France in the final in July.

Modric, who joined Madrid from Tottenham in 2012, received 29 percent of votes from the coaches and captains of national teams, reporters and fans.

Ronaldo, who left Madrid in the offseason to join Italian champion Juventus, was second with 19 percent. He captained European Portugal to a round-of-16 exit at the World Cup.

Mohamed Salah was third with 11 percent after scoring a record 32 goals in a 38-game English Premier League season for Liverpool, which reached its first Champions League final in 11 years.

France forward Kylian Mbappe was fourth and Messi fifth with just under 10 percent of the vote. Messi scored 45 goals for Barcelona, which won the Spanish title, but only netted once at the World Cup as Argentina was eliminated in the round of 16.

Messi and Ronaldo skipped the ceremony at London’s Royal Festival Hall and sent no messages of congratulations to Modric on their social media accounts, which have hundreds of millions of followers.

“Two guys we don’t know,” actor Idris Elba, who hosted the show, said after highlighting the absence of Messi and Ronaldo.

Former Croatia captain Zvonimir Boban, now a FIFA deputy secretary general, cried after being lauded by Modric from the stage.

“At this particular moment, I would like to mention my footballing idol and captain of Croatia generation 1998,” Modric said, referring to the team that finished third in the nation’s first World Cup appearance 20 years ago. “He was my big inspiration and that team gave us belief that we could achieve something great in Russia. Hopefully, we can be the same for next generations.”

“It was worth all the sacrifices,” the striker said.

No French player was among the finalists but Didier Deschamps was voted manager of the year after becoming only the third man to win the World Cup as a player and coach.

Salah didn’t leave empty-handed, earning the Puskas Award for his goal in the Merseyside derby last December. Salah’s goal in Liverpool’s 1-1 draw against Everton was a mixture of strength and footwork. Receiving a pass from right-back Joe Gomez, Salah shrugged off Cuca Martina, twisted inside Idrissa Gueye and curled a left-footed shot around Ashley Williams and into the top corner.

Thibaut Courtois added the FIFA goalkeeper award to the Golden Glove he collected in Russia for helping Belgium to third place with three clean sheets. Courtois left Chelsea for Madrid after the tournament.