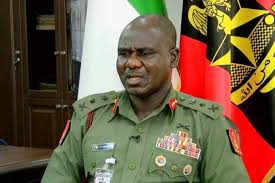 The family of Ayo Oluwaniyi, wife of one of the soldiers, who allegedly stole N400 million they were escorting, has lamented the arrest and detention of the woman and her three children by the Nigerian Army, in Ondo State.

It was gathered that 37-year-old Ayo and her children were arrested after her husband, Gabriel, was identified as one of the five soldiers alleged to have stolen the money they were escorting from Sokoto to Kaduna.

A family member, who spoke to our correspondent on condition of anonymity, said Ayo and her children were being detained at the 32 Artillery Brigade, Owena Barracks, Akure, the Ondo State capital.

She stated that they had been denied access to family members, adding that the family was worried about Ayo and her children’s state of health.

It had been earlier reported that five soldiers were confirmed to have stolen the money while on escort duty from Sokoto to Kaduna in the first week of July.

A former General Officer Commanding, 8 Division, Nigerian Army, Sokoto, Maj.-Gen. Hakeem Otiki, had reportedly asked the soldiers to escort the money and deliver it to a Very Important Person in Kaduna State.

Army sources stated that the runaway soldiers turned in their rifles and abandoned their mobile phones at the Infantry Corps in Jaji, Kaduna State, before they escaped.

One of the sources said, “Investigations so far showed that this was not the first time that the escort soldiers had conveyed such a huge amount of money for the officer. The soldiers all left their mobile phones in the vehicle, which has made tracking them difficult.”

The Oluwaniyi family source said, “Ayo’s husband is a soldier and he was deployed in Sokoto State. We learnt that that was not the first time they were escorting money on the instructions of their boss, so they decided to abscond with the money.

“We learnt that they dropped their uniforms, guns and phones. It was through Ayo husband’s phone that they got her number. They probably sent the information to the division here in Ondo and that was how she was arrested. We learnt that the wife of the other four soldiers had escaped.

“It’s been two weeks since Ayo and her children have been in detention. They won’t allow us to see them and they did not allow them to change clothes; they just kept on telling us that she was not being maltreated. We are worried; one of her children is just about a year old.

“They said the victims were being detained because they could not find her husband and probably she was in touch with him. She said she had not seen or heard from her husband, but they said maybe he would come out if Ayo and her children were held. We cannot speak with her; it is  one of the soldiers guarding her that we speak to.”

When the Brigade’s Assistant Director, Army Public Relations, Captain Victor Olukoya, was contacted, he said he was not at the base, adding that he would get back to our correspondent when he returned.

“I am not on the ground at the moment, I am attending a course. Anything you want to say, wait till I come back; I will let you know when I come back,” Olukoya stated.