May to meet her lawmakers as resignation talk swirls 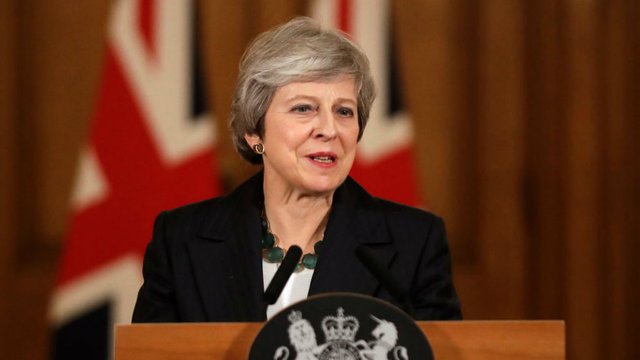 British Prime Minister Theresa May will address her Conservative Lawmakers on Wednesday possibly to announce a resignation date in a last throw of the dice to win support for her twice-rejected Brexit deal in parliament.

May was due to speak to the party’s so-called 1922 Committee at 1700 GMT on Wednesday, a lawmaker from her Conservative Party said.

The lawmaker is speaking on condition of anonymity, adding that it was “certainly a possibility’’ she could set her date of departure.

The political editor of The Sun newspaper said May was expected to set a date for her resignation at the meeting.

Nearly three years after the 2016 EU membership referendum, and four days before Britain was supposed to leave the bloc, it remains unclear how, when or even if Brexit will take place, with parliament and the nation still bitterly divided.

There were signs that some Eurosceptic lawmakers were prepared to swing behind her EU divorce plan before choosing a new leader closer to their position who would lead the next phase of negotiations with Brussels about a future trade deal.

May could try to bring her deal back to parliament on Thursday for a third vote on Britain’s biggest trade and foreign policy shift for more than 40 years.

On Monday, lawmakers seized control of the process in parliament for how Britain should leave the EU.

Jacob Rees-Mogg, the leader of a faction in May’s Conservative Party demanding a clean break from the EU, said the choice now seemed to be between May’s deal or no Brexit.

“I have always thought that no deal is better than Mrs May’s deal.

“But Mrs May’s deal is better than not leaving at all,’’ Rees-Mogg said in a podcast.

“I think it becomes the choice, eventually.

“But whether we are there yet is another matter.

“Leaving the European Union, even leaving it inadequately and having work to do afterwards, is better than not leaving at all.’’

Rees-Mogg has previously said her (May’s) deal would leave Britain a “slave state’’ but he has gradually softened his opposition.

Another Eurosceptic Conservative lawmaker, Michael Fabricant, said he too had come to the same “dreadful conclusion’’ that May’s plan was the “least bad option but the only practical way forward for now’’.

The alternatives, including Britain staying in a customs union or the EU’s single market, were far worse, Fabricant said.

Lawmakers wrested control of parliament’s agenda from the government on Monday, raising the possibility of a softer Brexit than envisaged in May’s plan, or Britain even staying in the EU.

Possible options to be considered include May’s deal, a no-deal Brexit, another referendum, revoking the Article 50 divorce process, a free trade agreement with a customs union and staying in the EU’s single market.

The government insisted the deal May agreed with the EU in November, after more than two years of negotiation, remained the only way forward for taking Britain out of the bloc.

Brexit Minister, Stephen Barclay, said on Sunday if parliament took control of the Brexit process, a snap election, which the main opposition Labour Party would likely back, could follow.

Lawmakers, who support the so-called indicative votes, called on May to heed whatever alternative Brexit strategy they can settle on.

“The bottom line is that something has got to change,’’ said Steve Brine, who quit as a junior health minister in May’s government in order to vote against her on Monday.

“We are stuck in this maddening impasse where we go round and round in circles; something has to move us forward.

“The House of Commons is not going to come up with something completely crazy.’’

Two lawmakers said there would be a string of meetings involving members of parliament on Tuesday on how Wednesday’s votes would take place.

At the same time, senior lawmakers were due to meet government representatives to discuss May’s deal and the next phase of negotiations with the EU about a future trade deal.

May’s chances of getting the votes in parliament she needs for her deal to be approved depend largely on the Northern Irish Democratic Unionist Party (DUP), which props up her minority government.

The DUP’s Brexit Spokesman, Sammy Wilson, sounded a note of defiance, saying his party’s support for the government did not trump the DUP’s fears that the so-called backstop arrangement in May’s Brexit divorce deal could lead to Northern Ireland being split from the rest of the United Kingdom.

“I don’t think that anyone would expect us, simply because we’re in a confidence supply arrangement with them, to sign up to our own death warrant constitutionally,’’ he said. (NAN)