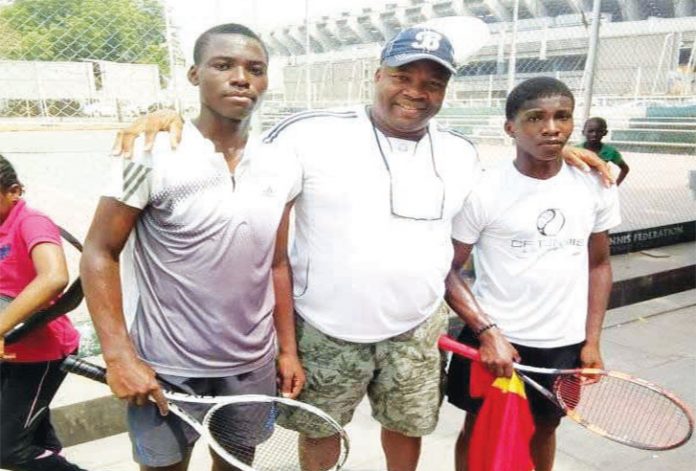 Chief Tochukwu Okeke is the President of Mainland Tennis Club, National Stadium, Surulere, Lagos. This tennis enthusiast since taking over the mantle of leadership of the prestigious club has brought about a lot of innovations aimed at making the club the best amongst its peers in the country. In this interview with Ifeanyi Eduzor, he spoke on his vision, the various transformations that have taken place in the club and what to expect this year, 2020.

How would you rate the achievements of the club in 2019?

For us at Mainland Tennis Club, our records are there for everybody to see. We don’t make noise because we believe that our action speaks for us. We’ve achieved a lot in terms of upgrade of facilities, giving the courts a facelift and helping upcoming players,  which culminated in the organisation of our annual end of year party and end of year tournament, which was keenly contested by 32 members. Not minding the  economic meltdown faced by the country, members were committed to putting the club on a good pedestal and members of sister clubs in Lagos and its environs, marvel at the transformation that is going on here and we’re not relenting in our efforts at making the club the best of its kind not only in Nigeria but the whole of West African Sub- region.

It has been a year since you became president of the club, how would you describe your experience so far?

It has been challenging and a good experience. But I think I was well prepared for the job, having been in the executive for nine years before becoming the president. The coupleration of the members have also been massive and they are always there to contribute ideas and  give their financial support for the club to move ahead.

READ ALSO: http://Facebook’s four apps, the most downloaded of the decade

In order to ensure that our facilities are up to international standard, members of the club spent about N4 million to restore the flood light. We also constructed a befitting club house, built toilets for both men and women and also upgraded the courts. This you know cost a lot of money but we’ll keep doing it for the love of the game. And I must have to commend my members for being there for me and I promise not to disappoint them.

Apart from the end of year tournament, did you organise any  other major tournament in 2019?

The answer to your question is yes. We organised a lot of tournaments both within the club and outside  with other sister clubs in Lagos and outside the country. In 2019 alone, we organised about six or seven tournaments, which were well attended. We also go outside the confines of the National Stadium to play tournaments, which has greatly helped our members. On a personal note, I’ve organised tournament for the past two years. I organised tennis championship for all the national players and also another one for the special athletes and the attendance to those two events was massive and I was encouraged to do more for the players.

What type of support does your club give to upcoming tennis players to enable them win laurels for the country?

We have a lot of upcoming players we have trained and sponsored to major tournaments to enable them get more exposure and experience. You know we have a lot of Rafael Nadal, Rogers Federer, Venus and Serena Williams and a lot of big players in the making in this country. Our members usually sponsor them and their education. You will agree with me that if you’re playing tennis or engage in any sports without education, you’re bound to fail because after retirement, it’s your certificate you will fall back on to move ahead in life and that’s why part of our corporate social responsibility function is to ensure we combine their sports with education. Having said this, it will interest you to know that the Number One U-18 player in this country, Eniolorunda Abayomi, is our product. When he started playing tennis, he was a little boy of 6-7 years but now he is a big player. It was the club that supported him. He just came back from Norway where he participated in a tournament. Already, a company has signed him up, but we are the people that groomed him and others, who are also making waves in the racket game

Will one be right to say that your club is targeting producing a Rafel Nadal and Roger Federer for the country?

That’s actually what we’re planning because there are a lot of Rafel Nadal and Roger Federer in this country. We have players with a lot of potentials but the problem is lack of sponsorship. The sponsorship at times is there but it’s not enough. So, I am appealing to corporate bodies and good spirited individuals in Nigeria to invest in tennis because it’s a lovely game. Once they sponsor these talented players, they’re helping to reduce crime in the society. I’m saying this because experience has shown that if you don’t get these boys engaged, they will be lured to crime and commit other negative things  because an idle mind is devil’s workshop. I thank God that our club is taking special interest in some of these players and I want others to emulate what we’re doing.

In all of these, what role has corporate Nigeria played in supporting your club to move tennis forward in the country?

Actually, we had expected the corporate world to partner with us and move Nigerian tennis to higher level but not much has been achieved in that area. All the things we have done are through self-help from members. But I must also say that we equally need the approval of the Ministry of Sports and Youth Development before we go into any type of partnership with corporate organisations because we don’t wholely own the facility. We have applied to them to allow us get sponsors that will help in improving our tennis and once we  get a favourable reply from them, we will know what to do. I also want to assure Nigerians  that the club is ever ready and willing to partner with any corporate organisation to move the game forward.

How would you describe your relationship with the Sports Ministry?

The relationship is quite cordial. They are our landlord because the facilities we use belong to the Sports Ministry. But the most important thing is that they recognise what we’re doing to move the game forward and they also appreciate the financial and human resources we have committed to the upgrade of  facilities. So, I will say that the relationship is cordial and quite good and we look forward to having more robust relationship with the Sports Ministry.

What should Nigerians expect from your club this year?

This year, we’re going to enter another level; new level in development, new level in facility upgrade, new level in sponsoring young talented tennis players with the aim of  taking tennis to another level. In  the new year, we shall be looking at the possibility of sending some of these players abroad to go and be in academies  where they will be trained further and get the required education and play tennis as well. My target in year 2020, is also to  ensure that our facilities are properly maintained and that gains we made over the years are sustained as well as continue to create an enabling environment where members can come play tennis, recreate and relax.

What advice do you have for members of the club and young tennis players?

My advice to members of the club is to keep on supporting my executive, as we plan to take the club to greater height. I quite commend them for their financial and moral support and their ability to sponsor the projects embarked upon by the club, not minding the economic difficulties facing the country. To the players, I want them to be dedicated and disciplined because that is the only way our members can develop interest in helping them improve their game. There is also the need for the players to take their studies seriously and avoid involving themselves in any type of social vice or crime, as that’s the only way to attain success.